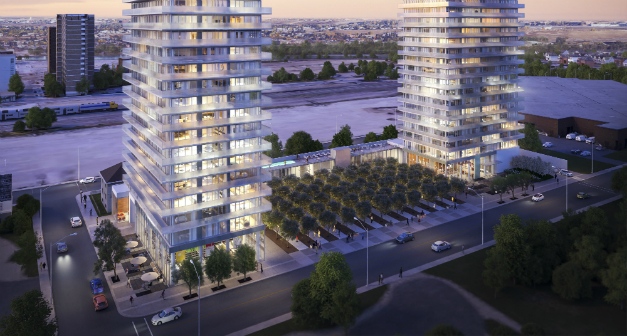 When it comes to getting a clear picture of the shape of Canada’s and the Greater Toronto Area’s (GTA) new home market, Ben Myers is the one to talk to. As Senior VP, Market Research & Analytics at Fortress Real Developments, and formerly of Urbanation, the industry’s leading source for condo market intelligence, Myers knows a thing or two about where the market is headed. So, we took the opportunity to chat with him about what 2015 holds for the GTA and the rest of the country. See below for our in depth interview! Let's start by recapping 2014. Which quarter was the most successful and why?

All quarters in 2014 were very successful in comparison to 2013. But in my mind, the third quarter stands out as a real turning point for the GTA condominium market specifically. It moved from good to great. According to Urbanation, Q3-2014 new condominium sales in the GTA were up 63% over the third quarter of 2013, the percent of the active market sold is at the highest level ever at 84%, prices started to grow again, and the condominium rental market remained very strong in the face of record completions.

At the beginning of the year, Barry Lyon predicted that 2014 would be the "year of incentives," targeting end-users and first-time homebuyers. Was he right? Will this be the case next year as well?

I would agree there were a lot of incentives in the GTA condominium market in 2014, but nowhere near the dollar value level prevalent in early 2009 when the market was really depressed. As the real estate landscape began to strengthen and the perception that the market was in trouble dissipated, those incentives have begun to fade. The incentive strategy is now only being utilized in projects offered at above market value or ‘B’ and ‘C’ level locations. End-users and first-time buyers are buying product under construction, or in very small pre-construction projects. These buyers prefer product with a shorter closing and there is no doubt we have seen more of this buyer in 2014 than 2013. The downtown or mega-tower projects continue to be dominated by investor buyers.

Many believe Toronto is overbuilding when it comes to condos. CIBC recently reported that Toronto actually needs more condos to account for immigrants and foreign investment. What's your opinion on this?

People are finally taking note of the fundamental shift occurring in the new housing market, away from low-rise ground-oriented housing to condominium apartment living. Fortress CEO Jawad Rathore talked about the increasing urbanization trend at the recent Real Estate Forum – this is a topic that people are still getting accustomed to.

We are not building any more new units today than we have annually over the past 20 years, but the share of ground-oriented vs. high-rise has shifted (more high-rise condo, less singles and semis). If there were too many high-rise units being built we would see completed unsold supply rising drastically. The unabsorbed apartment figure sits at 890 units per CMHC, lower than year-end in 2012 and 2013. If we were building too many units we would see resale prices decrease and condominium rents decline, the sales-to-listings ratio and lease-to-listings ratio increase, the average resale and rental days on market increase, none of which has occurred.

According to CMHC, there were over 22,000 apartment (condo + rental) starts in 2011 and over 29,000 in 2012, all of which are now completing construction with people moving in. The market has not skipped a beat. There is much fewer supply coming onto the market in the upcoming years with 18,000 starts in 2013 and just 13,000 through the first 11 months of 2014. So given the strong absorption at the high completions levels this year, we may actually be underbuilding and under delivering condominiums. So, 2014 saw lower housing starts across the country. What does 2015 hold and which regions of Canada will see a surge in starts? Which will see a slowdown?

Both Edmonton and Calgary experienced activity well above average in 2014. I expect both metro areas to experience declines in 2015, but remain above short-term averages. Winnipeg, which was still running well-above the long-run average in 2014, should also see declines next year. I expect a pick-up in starts in the Toronto CMA, with stronger new condominium sales activity in Q4-2013 and throughout 2014 as those projects commence construction in 2015. Ottawa will likely be relatively flat next year.

In your Market Manuscript, you predicted that the average price of single detached homes will increase 7% to 8%. Is there a certain region of the CMA that will play a more significant role in this surge in price?

The most popular areas for new single-detached homes in the Toronto CMA are located in east York Region: Richmond Hill, Markham, Stouffville. The demand has started to bleed over to Pickering and Ajax. The lack of available supply in conjunction with larger lots and larger home sizes are also contributing to the increase in average end-selling prices for new single-detached homes.

A secondary factor will be the desire for families to live in smaller communities close to major highways, so look for major price increases in areas like Georgetown, Queensville, King City and Nobleton.

You also predicted that the supply of single-detached homes will dwindle in the inner suburbs next year. Why will the supply decrease if there's such a strong demand?

The lack of available properties is driving land prices up, in turn driving the cost of homes up. With average pricing exceeding $1 million for many new single-detached homes in the GTA, it makes sense for a developer to sell 60 townhouses at $600,000 than 30 single-detached homes at $1.15 million, especially given the absorption is often quicker for townhouses because the pool of available purchasers is much larger.

Depending on the size of many of the infill properties available (as opposed to the typically larger greenfield property like a suburban farm, where a developer would want to offer a variety of housing types), a developer is often able to get more square footage approved when seeking townhouses on these smaller sites. Builders can sell for a higher price-per-square foot for townhouses as opposed to single-detached homes, which is also very attractive.

So despite a strong demand for new single-detached product, there is also strong demand for multi-family product. So offering towns instead of singles can often lower the market absorption period and offer higher profit.

Which region in the country will have the hottest condo market in 2015 and why?

Vancouver, Calgary and Edmonton had very strong condo markets in 2014, but I still believe the best market is Toronto. More than one million new people are going to move to Toronto over the next 10 years according to Urban Futures. Toronto will continue to raise its profile internationally as a rival destination to New York and London.

University graduates from across Canada (and even the United States) will still consider Toronto a top city for employment, entertainment and opportunity. Top flight retail and restaurants, modern architectural homes, and bountiful single people will keep young Gen X and Millenials interested in living in downtown Toronto high-rise apartments.

We have been very successful with condo projects with Lamb Development Corporation in both Calgary and Edmonton, and see the desire among the younger generation to live downtown in modern and architecturally beautiful buildings. Our downtown Winnipeg project – Sky City Centre, continues to drive thousands of people to www.fortressrealdevelopments.com every month as a maintenance free lifestyle with never-before-seen residential views is very appealing to many Winnipeggers. The Orchard in Calgary by Fortress and Lamb Developments

Every year, people find a way to predict a bust. Let's get it out of the way right now. What will the negative headlines say next year, and what will be the truth behind them?

More people are staying single longer, couples are having fewer kids, people are living longer, unit sizes are getting smaller, the quality of homes are getting better, investors are buying more units, affluent people are buying more second homes, more foreigners are investing in Canadian real estate, more parents are lending to their children, gentrification of neighbourhoods are making downtowns more desirable, land constraints are driving up prices, lack of transit spending is influencing where people want to live, lending conditions and constraints will change, tax implications will change, credit markets will change, technology will influence buying decisions (new smart homes, internet of things), and capital will continue to flow to countries that are stable politically and have conservative banking standards.

With the factors influencing the market changing daily in each regional market, declaring the Canadian market overvalued is an impossible statement to justify or prove. I always personally give the advice to buy a home somewhere you see yourself living for at least five years, therefore you can weather any potential short-term market price fluctuations.