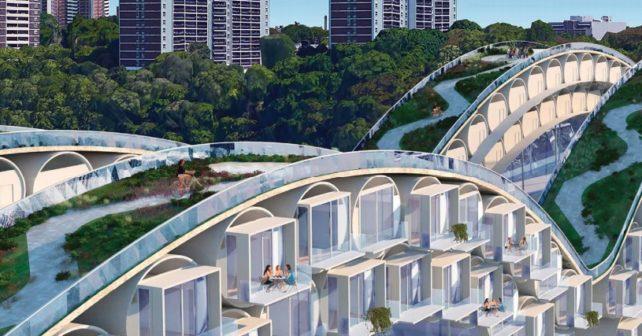 A year of intriguing urban designs, concepts and ideas

With the advancement of technology, the growing need for higher density living, and the strong demand for residential development in the downtown core, many intriguing urban designs, concepts and ideas surfaced in 2017.

The Greater Toronto Area (GTA) is also showing more support for artists and young, innovative thinkers, and a couple projects that were announced in 2016 took some major strides this year.

Here are seven urban projects that really stood out to us (in no particular order): At the beginning of the year, the Winter Stations winners were unveiled. The five winners and three student submissions were chosen to transform the lifeguard stands on Kew, Scarborough, and Balmy Beaches in Toronto’s east end.

The temporary installations included a hot spring, upside down evergreens, a stunning beacon of light, a memory bank, a reflective fortress, a pixelated tower, and others! The goal of Winter Stations is to encourage locals and tourists to visit the beach during the off-season. In May, the City of Toronto hosted a public meeting, unveiling new details for the King Street Pilot, which is currently underway and will run for a year.

The controversial project has mixed reviews; basically, motorists dislike it and pedestrians and transit riders love it. There has been some news about restaurants losing business due to the lack of traffic.

We’ll have to wait until late next year to have a greater idea of the impact the Pilot has had on the city and businesses along King. When Farrow Partners announced their concept for the Bloor Viaduct, it made headlines everywhere. Living Bridge would see the Bloor Viaduct transformed into a mixed-use, sustainable community.

The overall message delivered with this design is that Toronto is growing and if we want to accommodate an increasing population in a sustainable and healthy manner, we need to start rethinking how we see single-use infrastructure. It makes us wonder where else housing can exist.

In the fall, Waterfront Toronto announced its partnership with Sidewalk Labs, a firm owned by Google’s parent company, Alphabet. The Sidewalk Toronto project aims to transform the east waterfront area into the most high-tech neighbourhood in the world. It’s basically a smart city within a city.

The area would be testing grounds for all sorts of new urban technology, like autonomous vehicles. The project will tackle a number of challenges from sustainability to affordable housing and community engagement.

The winners of the 2017 NXT City Prize

The NXT City Prize is an annual ideas competition that encourages designers, architects, engineers and all other creative thinkers to reimagine how Toronto’s public spaces can be improved.

There were three winners this year. One turned the Liberty Market Galleria into an interactive light destination, serving as a beacon for Liberty Village. Another proposed the redevelopment of the Wellington Destructor into a global seed vault. And the Civic Tech winner aimed to improve the accessibility of public spaces through a mobile app that streamlined the permit application process. This is technically an idea for January 2018, but the winners and renderings have been released, so we’re praising them now!

This design competition was created by the Winter Stations founders. The idea is the same; temporary installations are installed to encourage people to traverse the waterfront area in the winter.

Our favourite design that we can’t wait to see is the big red bear! Okay, so this concept actually made our list for Best of 2016, but recently it’s become slightly more than a concept. City council voted to move forward with the planning phase of Rail Deck Park. Now it’s time to figure out how to build it and how to pay for it!

With 2018 around the corner, we can’t wait to see what other urban designs, concepts and ideas get announced, and we also look forward to seeing some of these other projects move forward in the new year!