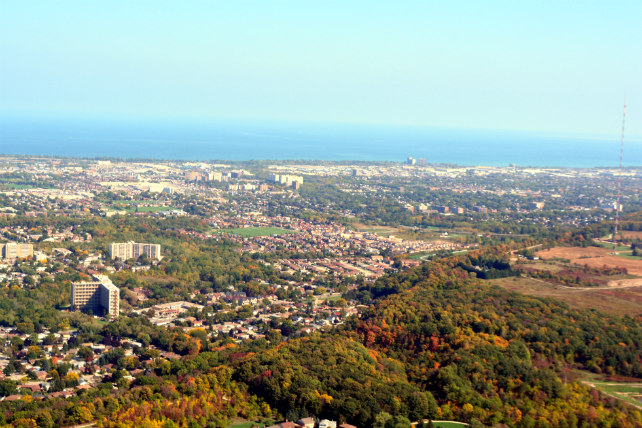 Inspired by New York’s famous Central Park, Losani Homes’ master-planned community will be one of the largest in Hamilton, located along Rymal Road East in Stoney Creek. The community will have 15 acres of greenspace at its centre and will be nestled adjacent to the almost 200-acre Eramosa Karst Conservation Area.

“When we came up with the concept of calling our community Central Park, we did so because we saw so many parallels between our neighbourhood and New York’s Central Park, even Manhattan in general,” says Fred Losani, CEO Losani Homes, in the official video trailer for the Central Park project.

“Central Park is a gathering centre for all of Manhattan. We have much of the same thing going on; the amount of conservation land that exists right outside the doorstep of our community is magnificent. And the sheer size of our community has also within it a number of neighbourhoods, not unlike New York,” Losani adds. Central Park will be comprised of four neighbourhoods. The first to launch will be Park Ave., which is inspired by Greenwich Village and New York’s Park Avenue, featuring freehold, modern townhomes starting from the low $300,000s and detached homes on 33’-50’ lots starting from the high $400,000s.

The Madison neighbourhood will feature two- and three-storey urban townhomes steps from Eco-Trail Promenade and the park. Soho is a collection of mid-rise condo units with clubhouse style amenities, also near Eco-Trail Promenade and the community park. Midtown will feature mid-rise condos and two- and three storey urban townhomes next to shops, services, and restaurants on Rymal Road.

“We’re connected to nature in a huge way,” Losani says. “The trail system and eco-trail promenade connects you to hundreds and hundreds and thousands of acres of land, which promotes a very active style of living and I think it’s just a better way to be able to interact with friends.” Hamilton is widely known for its numerous waterfalls, conservation areas, parks, and being close to Lake Ontario. There are also many neighbourhood amenities. Central Park may be a new master-planned community but you don’t have to wait for new shops and services to open, they are already surrounding you.

The neighbourhood is peppered with retail, entertainment venues, grocery stores, and schools. There is a Super Centre nearby, as well as a SilverCity Cinema. With both elementary and secondary schools nearby, Central Park is the perfect community in which to set firm roots.

Getting around Hamilton and connecting to neighbouring cities is very easy thanks to quick accessibility to the Lincoln M. Alexander Parkway, Red Hill Valley Parkway, the QEW, and Highway 403. Also, John C. Munro Hamilton International Airport is only 16 minutes away by car. While flying over the community, we were able to get a real impression of the actual scale of this project. Central Park is a game-changer for Hamilton. It has everything; timeless contemporary designs with modern touches, a convenient location, ample greenspace, and a builder with a reputation for building high quality homes.

If you’re interested in Park Ave., the first phase of Central Park, then you should register right now! Sales start late October.