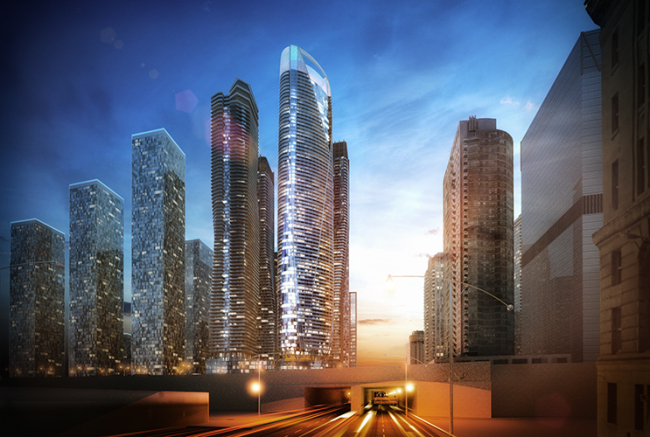 One of the most high profile developments currently underway in Toronto is the 1 Yonge master-plan by Pinnacle International. Since 1 Yonge will feature four residential buildings ranging from 70 to 88 storeys, we just had to catch up with our friend Anson Kwok, the VP of Sales & Marketing at Pinnacle, for Super Tall Towers Month!

The 1 Yonge master-plan in Toronto

Designed by Hariri Pontarini Architects, 1 Yonge will feature a hotel tower and two office towers in addition to the previously mentioned residential towers. 1 Yonge isn’t just enhancing the skyline, it’s also going to affect the neighbourhood at street level with a new 17 meter wide Yonge Street promenade and an extension of Harbour Street. The big question is, why do cities want to build towers over 80 storeys high? “For us, it’s very location driven. I think in most major cities, location is probably the primary reason to build super tall buildings. In many countries, 88 storeys isn’t even considered super tall,” Kwok explained.  “It’s about creating a complex mix of uses. I think that’s the expectation now. If you look at most big cities, you’re looking at six, seven different uses all integrated, and that’s what we want it to be. And, if we’re trying to not rely as much on cars, we’re going to need a more vertical community base.” On top of residential space, a hotel, and offices, 1 Yonge also plans on featuring retail space, a grocery store, and a daycare. So, not only is 1 Yonge one of the largest high-rise developments planned for Toronto, it is also going to appeal to families. “We already build a lot of three-bedrooms and I don’t think it’s a stretch to build something suitable for families at 1 Yonge. In the future, I think it will be easier to raise kids without cars,” said Kwok. The benefits of super tall towers

As Roland Rom Colthoff recently put it, the benefits of super tall towers aren’t necessarily just about height. Kwok explained that “If you want to create more employment, more tax dollars for the city, have all the amenities and bells and whistles, and you want everything to be convenient and close to you, then in order to bring that all together, you need to have it be tall.” The actual height of a super tall tower doesn’t really matter; how you make use of the space is what counts.

Living close to work has become critical. Kwok believes that the next generation of homebuyers will want to settle downtown and that an hour commute won’t even be considered an option. A decade down the line, today’s condo dwellers will upgrade to a bigger condo in the city to have a family rather than moving out to the suburbs.

“I don’t think anyone ever complains about being too close to work, or says, ‘it’s so vibrant, there’s too many people around.’ People don’t complain about that. Having that vibrancy only makes it better,” Kwok continued.

Stay tuned - in PART 2, Anson Kwok discusses why some people are opposed to super tall tower designs, and we learn more about 1 Yonge’s progress!