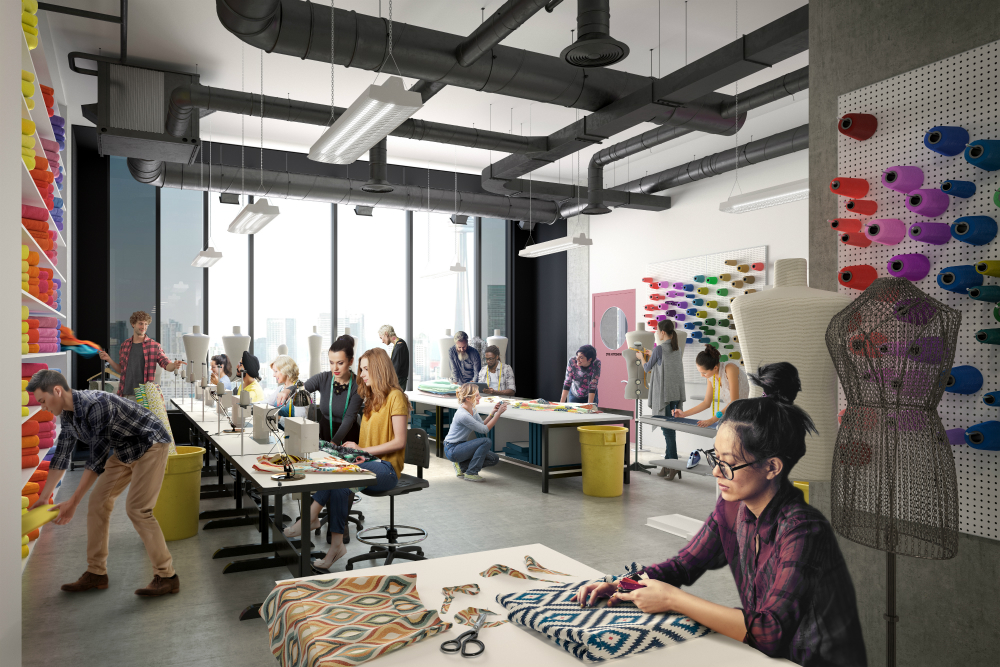 Last week, The Daniels Corporation, Artscape, and a number of artists, community members, and politicians gathered at the Daniels Waterfront - City of the Arts presentation centre to unveil Artscape Daniels Launchpad and announce reaching $21.4 million in funding!

“It is becoming harder and harder to sustain a career as an artist or designer,” said Tim Jones, Artscape CEO. “After many years of research and collaboration, we are very excited to be introducing Artscape Daniels Launchpad and announcing the partners who will help thousands of creators more fully realize their potential.” $14,050,000 was raised in capital funding; $4,450,000 in community bonds, and $2,993,000 in program and start-up funding. The funds were raised from donations from the private sector, philanthropists, and funding from all three levels of government. The leadership gift of $5.75 million was donated by Daniels and the John and Myrna Daniels Foundation, which also includes $625,000 from WJ Properties (City of the Arts development partner).

“The Government of Canada is committed to supporting Canada’s cultural infrastructure,” said Adam Vaughan, Member of Parliament (Spadina-Fort York). “With today’s investment, we are making the most of Toronto’s unique assets to strengthen southern Ontario’s creative cluster. Artscape Launchpad will help connect artists and designers from all over southern Ontario to skills training and to the businesses that need their services—all in a state-of-the-art facility.” Artscape Daniels Launchpad features a wide variety of resources, tools, equipment, services, and facilities that support creative artists and entrepreneurs. The goal is to create and facilitate thriving careers and businesses.

“The City of Toronto is proud to support artists and designers in the GTA and beyond through Artscape Daniels Launchpad,” said Toronto Mayor John Tory. “Toronto is home to Canada’s largest concentration of cultural workers, and we understand that when our creative communities thrive, we build a more vibrant, resilient and prosperous city for everyone.” “We are thrilled to once again partner with Artscape and combine our name with theirs in the creation of Artscape Daniels Launchpad in the heart of our City of the Arts community,” said Don Pugh, Vice President of The Daniels Corporation. “Supporting this creative entrepreneurship hub is an opportunity to reinforce Daniels’ commitment to the arts and to ensure that artists themselves play an important role in city building.” Before the opening, there are a few more milestones to hit. In October of this year, there will be another major academic and corporate partnership announcement. In January 2018, the membership program at Launchpad will kick off, followed by more details about the studios and equipment that will be available to artists. In the summer of 2018, we’ll be able to get in for a sneak peek before Launchpad opens in the fall.

We can’t wait to watch Artscape Daniels Launchpad, as well as the entire City of the Arts community grow over the next couple years!