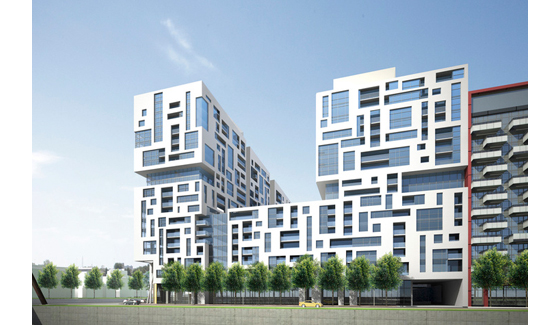 Bathurst and Front St. to Launch in Early 2013

We have been waiting patiently on a lot of new Toronto projects. With the amount of unsold inventory rising, developers have put some projects on the back burner.

One project that we have been waiting on is Freed and Minto's joint project at the corner of Front St. West and Bathurst. The yet to be named project has been pulled back due to market conditions while the two developers tighten up some of their plans, including suite offerings, pricing, and more.

Well, according to Minto's website, they are set to launch in the spring market of 2013! Front St. and Bathurst has the potential to be one of the hottest developments of the year. Why? First off, the building, designed by Wallman Architects, offers unique architecture in an area that is becoming known for aesthetically pleasing developments. Second, as we reported recently, RioCan is looking to bring an “Eaton Centre style” commercial/retail building to the site of the former Globe and Mail Office. An amazing condo project next to a new retail building is pretty exciting - it’s like a mini master plan!

Front St. and Bathurst will bring 970 suites to the area. The four-tower project will have heights that range between four and 22 storeys, and feature 960 parking spaces. The site, the former home of a Harley Davidson dealership and an indoor rock climbing company, has been leveled in anticipation of the new community.

At this point, there is no doubt Toronto is the envy of a lot of other real estate markets, and we’re excited to see how major projects like this one by Freed and Minto fare in the new year. Just when we thought the west end was filling up, these two creative developers present something very exciting! We’re looking forward to following the Front and Bathurst project after the holidays.