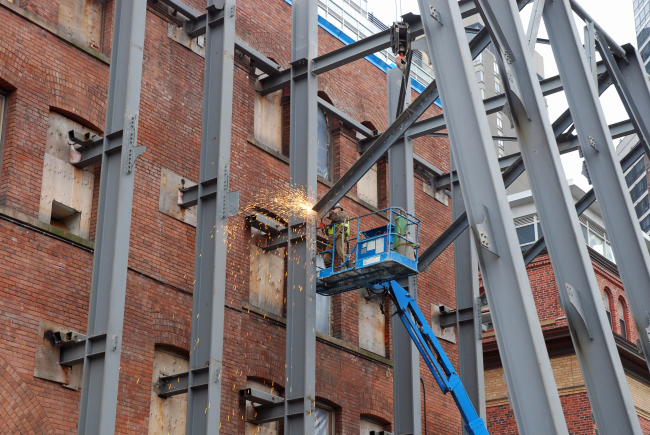 One of Toronto’s most ambitious heritage preservation initiatives is taking another step forward.

Hariri Pontarini Architects’ design for MOD Developments and Graywood Developments’ project FIVE Condos at 5 St. Joseph integrates an historical facade on the north side of the podium. In order to maintain the structural integrity of the facade, a complex beam system was installed, which literally suspended it above the construction site while the crew worked to get to grade. When we last visited FIVE Condos, construction was on the fifth floor, but now that they are 17 storeys up, it is finally safe to remove the beams.

We met Project Coordinator David Naismith on site to learn more about the beam removal. “It’s been ongoing for about a week and a half. The crane came in yesterday [Dec. 3] so they’re moving pretty quick with the big stuff,” said Naismith. “I think it will all be down by the weekend.” This isn’t the only heritage aspect of FIVE Condos. MOD Developments and Graywood are also preserving the historical Yonge facade. The second and third floors behind the facade will feature a collection of suites called the Heritage Lofts.

“They’re almost done all the brickwork on the exterior, just the restoration. All the windows are in, and they’re starting to gut the insides,” Naismith said about the Heritage Lofts. “All the floors, everything’s coming out.”

As for the rest of the construction, Naismith said that they are moving at a good pace, finishing about a floor a week. Depending on the winter weather, FIVE Condos could be topping off by next summer!

When FIVE Condos is fully complete, it will stand 50 floors high (48 of which are residential) and feature suites ranging from 399 to 1,683 square feet. The interiors will boast a vast selection of features and finishes custom designed by interior design firm Cecconi Simone.