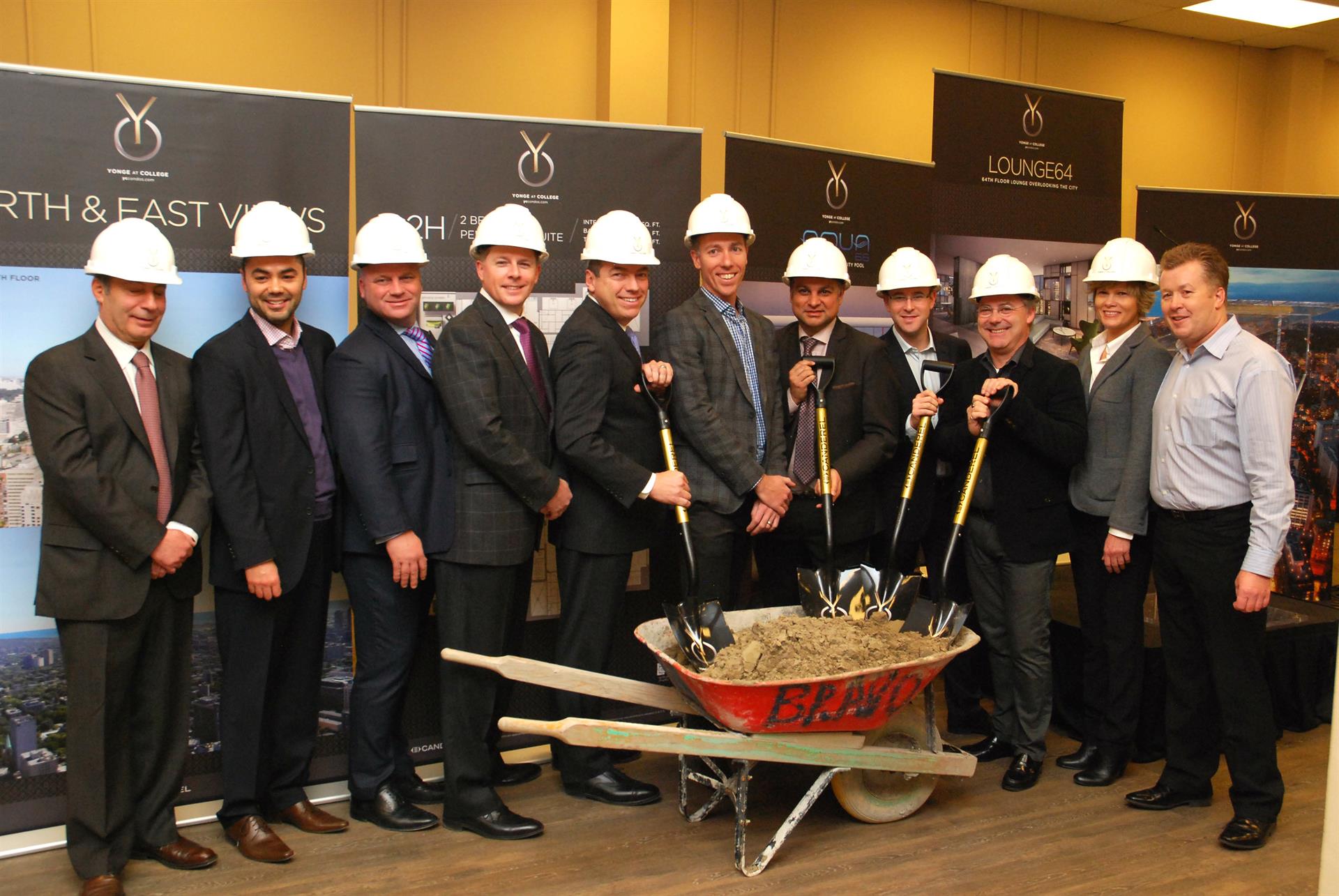 Last week, Canderel officially broke ground at YC Condos in Toronto. It seems like only yesterday that the condo launched to hoards of prospective homebuyers. Actually, it might as well have been yesterday because the units at YC Condos sold like hot cakes! Rizwan Dhanji, Vice-President, Sales & Marketing, Residential Group at Canderel broke down the impressive sales figures. “In the first five days only, we sold 173 units, which is approximately 27% of the building. In February, we sold 347 units, which is almost 55% of the building, and by March, we sold another 67 units. Basically, in two months, we sold 587 of the 634 units in the building,” explained Dhanji. “Then we launched our penthouses in April of this year, and we’ve sold 55% of those in the first two months. Officially, now we have six units remaining. It’s a real testament to what Canderel has done in the neighbourhood between Aura, YC Condos, College Park Phase 1 and College Park Phase 2; we’ve built close to 3,000 condos in the College Park neighbourhood.” The six remaining units are divided between two collections: The Penthouse Collection and the Skyloft Penthouses. The units are located on floors 61 to 65, and a few of them even feature two levels. The floorplans span from one-bedroom+den to three-bedroom, ranging from 996 to 1,514 square feet. Prices for these impressive sky high units range from $849,900 to $1,399,900.

A few of the premium interior features and finishes include contemporary appliances, quartz countertops, custom designed cabinetry, gas fireplaces, and 10’ ceilings. One of the biggest announcements of the year was when Canderel announced their Digital Home package, a True Marquee service powered by Samsung. The Canderel Digital Home Package is a full luxury suite of smart home tech that allows the resident to control every aspect of their home from door locks, to lighting, to their entertainment system, and even security cameras and air conditioning. As far as amenities go, YC Condos features all the luxury spaces you have come to expect in a sophisticated high-rise residence, such as a billiards room, a stylish social lounge, and a beautiful dining room for hosting dinner parties. One of the amenities that really stands out at YC Condos is Aqua66, the infinity pool on the 66th floor. It’s pretty safe to say that Aqua66 is probably the highest infinity pool in the western hemisphere.

“What an amazing business we’re in and how lucky we are to be able to every day work on converting dreams to reality,” Rogowski said. “I think if you look back several years ago at this site, no one would think there would be a 66-storey building looking like this about to commence construction. That only happens through excellent partnerships built on trust.” Located at Yonge and Grenville, just north of College, YC Condos is where two neighbourhoods blend into one another. To the north, you have the high-end boutiques, museums, and art galleries of Bloor and Yorkville, and to the south, the lively vibe of Yonge and Dundas. With the Yonge subway just a few steps away, the rest of downtown is easily accessible, and the College/Carlton streetcar facilitates east to west travel.