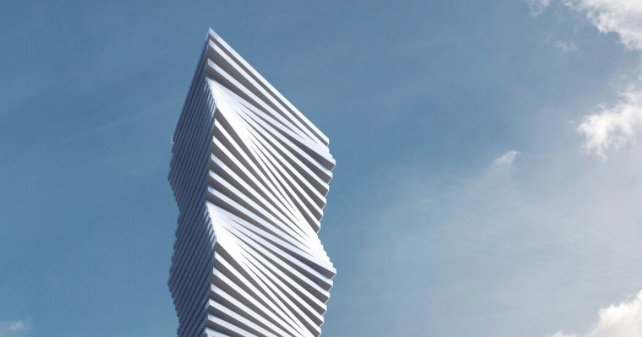 “Mississauga has reached an inflection point and we recognize that we have a significant role to play in how this city continues to evolve,” says Edward Rogers, Rogers Real Estate Development Limited, in a recent release. “This is a once-in-a-lifetime opportunity to play an active role in shaping the future of a city.” The 60-storey tower is the first of 10 towers planned for M City, and will serve as the anchor of the community. Designed by CORE Architects, the tower will consist of seven floor plates that twist in a repetitive pattern as the building rises, playing off the curviness that Absolute Towers brought to the city’s skyline.

“Mississauga’s ambition served as our motivation. The city is carving out a special portion of Burnhamthorpe Road that houses Celebration Square, The Living Arts Centre, Square One and the LRT, and turning it into a memorable downtown core,” says Babak Eslahjou, CORE Architects. “We wanted to address this nascent urbanism, recognizing that M City plays a vital role in the formation of an urbanized centre.”

The podium will feature faceted glass walls giving it a “prismatic” shape, and there will be rooftop amenity space. Building amenities include a kids’ play zone, a splash pad, a pool that turns into a skating rink in the winter, a chef’s kitchen with dining space, small and large lounges, a kids’ lounge with games, and a gym with a yoga/spinning studio. As predicted, the condo market is starting to see more buildings with amenities geared towards families.

“M City’s tower will be instantly recognizable, but equal attention and care was given to the podium, which anchors the project. Not only does the podium enable the lifestyle component of the building, but it defines how this and future phases interact with the streetscape and the fine grain network of blocks that characterize the master plan,” says Mark Reeve, partner, Urban Capital Property Group.

The interiors were designed by Cecconi Simone, which mirror the fluid form and geometric characteristics of the exterior.

“It was important that the interiors and amenities achieved the same attributes as the architecture: fluidity, movement, excitement,” explains Elaine Cecconi, partner, Cecconi Simone. “The amenities flow from interior to exterior and the spaces are not simply square or straight but are sculpted in angular planes defined with different materials. Floor finishes wrap up walls, planes are folded and twisted, sunlight and artificial light are manipulated to enhance the spaces.” There are 784 units in total with plans from one-bedroom to two-bedroom+den, ranging from 400 to 1,300 square feet. There will be integrated appliances in the kitchens, as well as custom designed cabinetry.

Located at Burnhamthorpe Road and Confederation Parkway, the anchor tower for M City will have retail space at grade and be nestled against two acres of public parkland.

“This new development was inspired by the City of Mississauga’s Downtown 21 Plan and is part of our efforts to build a complete city – a place where people can live, work, earn an education and enjoy an unrivalled quality of life – all within their city,” says City of Mississauga Mayor Bonnie Crombie. “This new community will be plugged into our growing regionally-integrated transit network that will include the new 20 kilometer, 20 stops Hurontario Light Rail Transit and our extensive MiWay bus transit network that runs through the heart of Mississauga’s emerging downtown.” Register for M City in Mississauga

Clearly, this is the start of something big for Mississauga, and this is your chance to get in on the ground floor. Prices range from $199,900 to more than $700,000. We expect to see singles, couples, first-time buyers, downsizers, and families all showing interest in M City.