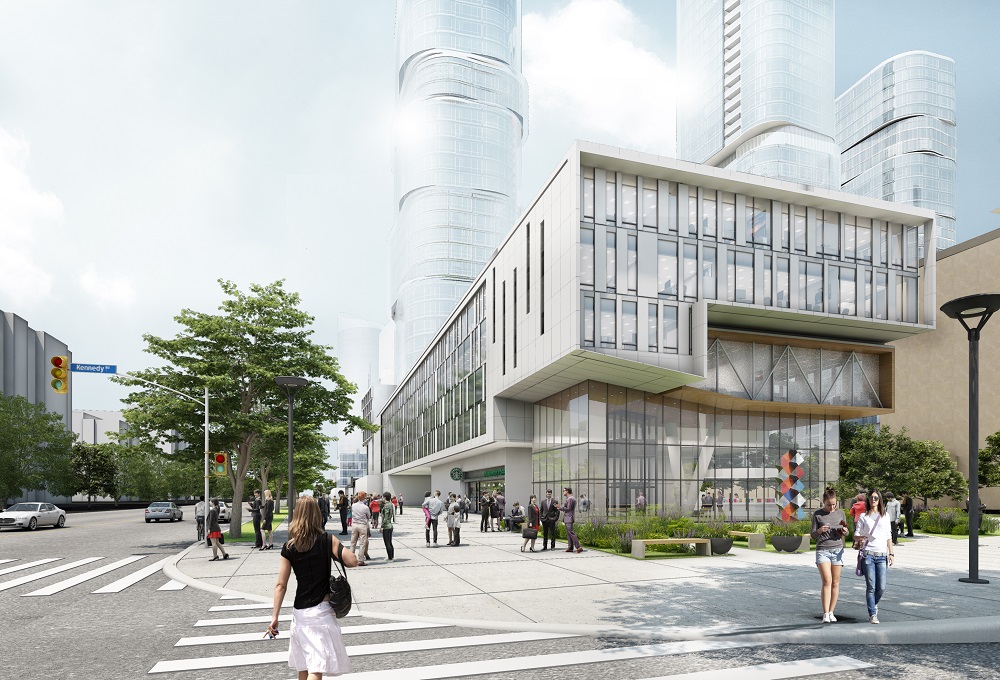 Newinhomes.com recently had the opportunity to meet with Steven K. Bishop, Vice President, Development Services, North American Development Group (NADG), and Cameron MacKinnon of MacKinnon Public Affairs, to learn more about the ambitious plans for the redevelopment of Agincourt Mall in Scarborough.

Located on the northwest corner of Kennedy and Sheppard, Agincourt Mall is a 26-acre site, and two-thirds of it is parking lot, so there is a great deal of opportunity here. NADG’s plan is a mixed-use community with commercial, retail, residential space, and a strong focus on the public realm. When it comes to establishing a community vibe, “Entertainment seems to be the new driver, and this community is certainly lacking in restaurants and cafes, things that really draw people to the area and get them walking through the streets. We think we can improve that,” said Bishop.

“We’ve been successful in having very positive feedback from a number of the tenants, including No Frills and Walmart,” Bishop said. “We’re going to really keep the essence of what Agincourt Mall currently delivers, it’s just going to change in form. We’ll create complete streets that will be a lot more attractive to the retailers and the neighbours who will be able to easily walk from their condos and townhouses to do their daily shopping.”

There will be a mix of residential, including townhomes around the semicircle park, mid-rise podium buildings, and some high-rise towers. Currently, NADG is considering 10 residential towers of various heights. Whether these will be condo or rental buildings has not been determined. Bishop couldn’t provide an estimated number of total units, but NADG knows it will be in the thousands.

Aside from the significant amount of new residential space, one aspect of the Agincourt project that really stands out is the idea of having “complete streets.” MacKinnon explained that they are moving all of the parking underground so there’s more space for pedestrians, cyclists, and programming by tenants and the community.

The main entrance off Sheppard has been labelled the Rambla, inspired by La Rambla in Barcelona, which is an outdoor tree-lined pedestrian mall. The east side of the Rambla will feature primarily restaurants while the west side will have a food store and other retailers. The Rambla will lead to the Square, which will serve as the heart of Agincourt. “The Square is one of my favourite parts, which is at the north end of the Rambla, kind of a focal point for the main entrance,” said Bishop. “It will be programmable and entice the community to get together; it will be a great place to meet, grab a coffee, wander around and do your shopping, and just have some fun with friends.”

NADG has put a lot of thought into the concept for the redevelopment of Agincourt Mall, and we think this is really going to be a game changer for the neighbourhood. “With the way the whole housing situation has gone, we looked at the location, looked into future transit plans, and just thought it was kind of a no brainer,” said Bishop.

“The Sheppard LRT/subway (depending who you talk to) is still on the books, and the thing that’s happening for sure is they’re doubling the tracks at the GO Station,” MacKinnon added. “Whether it’s a SmartTrack Station or a GO RER program, there’s going to be two-way, all-day service every 10 minutes.”

The next steps for Agincourt Mall NADG is submitting their Official Plan Application this summer, which will be followed by a city staff response and another Public Consultation Meeting with city staff and councillors in attendance. In 2018, NADG will work on finalizing the plans based on public and city feedback. If all goes according to plan, construction will begin 2019-2020.

NADG has redeveloped more than 200 shopping centres in Canada and the US, owning over 30 million square feet of mixed-use space. They also own 1,600 acres of land in North America for future development. Their portfolio has an enterprise value of $4 billion.

The Agincourt Mall redevelopment is still in the concept phase, but we are definitely excited to watch this project move forward over the next few years!