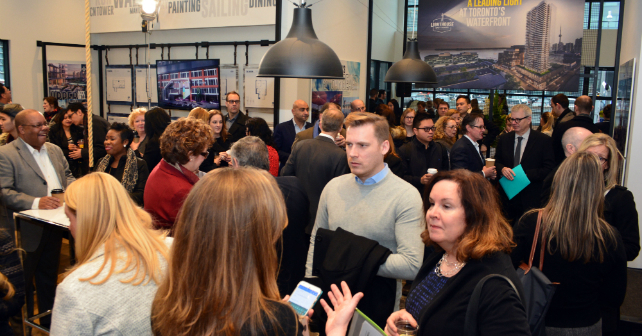 On January 23rd, George Brown College representatives, The Daniels Corporation, and members of the federal government, including Adam Vaughan, Member of Parliament for Spadina-Fort York, gathered at the Daniels Waterfront - City of the Arts presentation centre for a big announcement. George Brown College officially announced the Innovation Exchange and expansion of their waterfront campus in Toronto!

The $59 million expansion will house part of George Brown School of Design with a new interdisciplinary design studio, Institute without Boundaries, and the Innovation Exchange, which will focus on fostering design solutions for the smart economy. “Daniels Waterfront - City of the Arts is the embodiment of its name,” said Daniels Vice President Martin Blake. “It plays a central role as a social, cultural, and most importantly an economic driver. City of the Arts is designed to foster an entrepreneurial spirit for creative people and organizations.”

“One of the things that makes City of the Arts so special is the academic element. From day one, we recognized that in order to foster sustainable careers in arts - which is a big part of the vision of this community - education, training, apprenticeships and mentorships were critical,” he added. “We knew that academic partnerships would have a positive impact and provide tremendous value to this community.”

Through the Post-Secondary Institutions Strategic Investment Fund, the federal government is supporting the new George Brown College development at City of the Arts with $15.6 million. “You don’t just build housing, you house people. When you house people, you don’t just build housing, you build communities,” Vaughan announced. “Students use transit at a higher rate, a deeper rate, and a more frequent rate than any other demographic in Toronto - in Ontario,” he continued. “When you put a university into a new neighbourhood, or a college into a new neighbourhood, you put transit bodies into that community, and their use of transit creates a stronger system that residential and commercial developers are attracted to. Using universities and colleges to drive change in our cities is one of the smartest ways we can create smart people but it’s also one of the smartest ways we can create a smart city.”

According to a release from George Brown College, approximately 1,800 students will study at the Innovation Exchange. Programs expected to be offered include graphic design, interaction design and development, game development, game programming, game design, concept art for entertainment, interactive media management, design management, an interdisciplinary design strategy. The Innovation Exchange will produce around 600 graduates annually, adding a strong, educated, and well-trained workforce to our labour market. “Through this expansion of our waterfront campus, our students, staff and industry partners will gain access to more than 100,000 square feet of new, learning and collaborative spaces,” said Anne Sado, George Brown College President. “This project is the third partnership between George Brown College and Daniels...it seems that every time we work together, our projects grow in scope and impact.” “The School of Design at George Brown College has been strongly focused on creative collaboration required by the 21st century global economy,” said Luigi Ferrara, Dean of the Centre for Arts, Design & Information Technology at George Brown College. “Across industries there’s a shift from engineer driven to design driven product, from product centric to consumer centric service models, and marketing focused to user-experienced focused business models.”

Stay on top of Daniels Waterfront - City of the Arts 130 QQE at Daniels Waterfront - City of the Arts

There’s so much happening at Daniels Waterfront - City of the Arts! Excavation for Lighthouse Tower is currently underway on the north parcel of the site and the concrete is being poured on the sixth floor of the office condos on the south parcel.

The office building at 130 Queens Quay East is scheduled to top off this July. There are already many creative organizations planning to occupy 130 QQE, including Artscape, Colleges Ontario, OCAD University, Remix Project, Manifesto, and Daniels is moving their head office there.

Scroll down for more images of the George Brown College expansion: