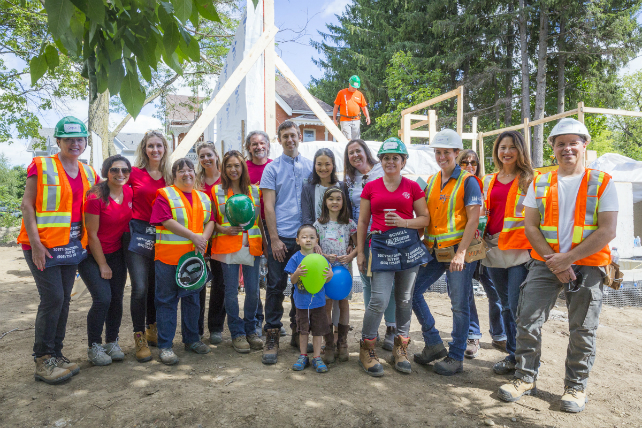 Following the official ribbon-cutting, Geranium Homes build team stops for photos with Sosin Family (centre) who will take possession of their new home in October.

Last week, Geranium Homes and invited guests kicked off the five-day “Blitz Build” on the first Habitat for Humanity Greater Toronto Area (GTA) home in Whitchurch-Stouffville. A total of 75 volunteers, including Geranium staff, worked full days on the Main Street site to erect the frame of the house, which will eventually be home to a family of four. The construction started on August 18th and the frame was completed August 24th. The home will be completed and the keys will be handed over to the family in October. Monday’s crew prepares to raise exterior wall.“When we learned that Habitat for Humanity GTA was undertaking its first build in Whitchurch-Stouffville, we knew we wanted to be involved,” says Boaz Feiner, President, Geranium Homes. “Since June 2015, our senior vice president, land development Shauna Dudding has also been on the Board of Habitat GTA, and it is her dedication to the organization that makes us particularly proud of our sponsorship.”Habitat for Humanity GTA is a non-profit organization that focuses on providing low-income families and those in need with affordable housing. It’s not just about building a home, but building a stable life for families within a community that is supportive and offers all of the amenities that a family requires on a daily basis.  “This is a great team building opportunity for our employees, and a rare chance for many to experience what it’s like to work on a construction site,” adds Feiner. “We’ll be giving back to the local community in a highly meaningful way and at the end of each day, volunteers will see the progress they’ve made on this house for a working, low-income family. A very rewarding experience for everyone.” Whitchurch-Stouffville Mayor Justin Altmann (centre blue hard hat)built alongside Geranium team on Friday.Geranium Homes has been active in Stouffville since 2008 when they first launched their master-planned community The Neighbourhoods of Cardinal Point. This is a 100-acre community just north of Main Street between Ninth Line and Highway 48.  You still have an opportunity to purchase a new Geranium Home in Stouffville because there are a couple new collections in the works, and the condo PACE on Main is now under construction! This new condo is right on Main Street and is now approximately 70% sold.“PACE on Main is symbolic of what can be achieved through rigorous dialogue and collaboration between citizens, Town representatives and business,” said Mayor Justin Altmann at the recent ground breaking. “We are thrilled to see this new condominium building get underway and look forward to welcoming PACE residents to our great downtown in 2017.”The available suites range from 672 to 1,368 square feet and are priced from as low as $349,900. With one-, two-, and three-bedroom plans, there are suites for all sorts of buyers, including singles, couples, investors, and downsizers. Whitchurch-Stouffville Mayor Justin Altmann (top left) poses with (clockwise) Geranium’s Shauna Dudding, Boaz Feiner and Louie Morizio during work break.A few of the impressive interior features and finishes at PACE on MAIN include 9’ ceilings, large windows that allow in a lot of natural light, engineered hardwood flooring, granite countertops, and full-size appliances. The other new community that’s part of the Cardinal Point master-plan is Vista Flats and Towns, which will be priced from the high $300,000s. The flats are one-storey residences and the townhomes are two-storey. Geranium will be releasing more information on Vista soon, so you need to register!

There are more photos of the Habitat GTA Blitz Build on Geranium Homes’ Facebook page!