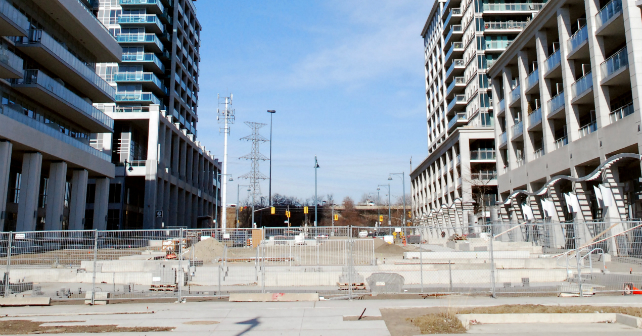 The Building Industry and Land Development Association (BILD) released its April 2015 new home stats, announcing a record-high price gap, tripling the figure from a decade ago.

"Our industry is challenged to build quality, complete communities that people in the GTA can afford to purchase," says BILD president and CEO Bryan Tuckey. "A significant factor in the rising cost of new homes has been increased demand that is far outpacing supply, particularly in ground-related housing." View of Toronto from Daniels' One Park Place

Over the last year, the average price of a low-rise home has risen 16%, and high-rise unit prices have grown steadily by 3%. While prices are on the rise for the new low-rise market, inventory levels are at an all-time low. In April, there were just 5,171 low-rise homes available to purchase throughout the entire GTA. That’s less than one-third of the total inventory in 2005. High-rise inventory has remained stable at 19,580 units in April.

"As the price gap continues to grow, new-home purchasers are faced with decreasing choice in housing type," Tuckey adds, pointing out that first-time homebuyers are the most affected. "Buying a ground-related home in the GTA has become increasingly challenging for most purchasers, many of whom have been taken out of the low-rise market entirely."

There were 2,612 new low-rise sales in the GTA last April, and 1,482 high-rise sales, for a total of 4,094 sales. Even with a low inventory and soaring prices, that’s nearly 700 more sales compared to April 2014. What does the rest of spring hold? Stay tuned to find out!