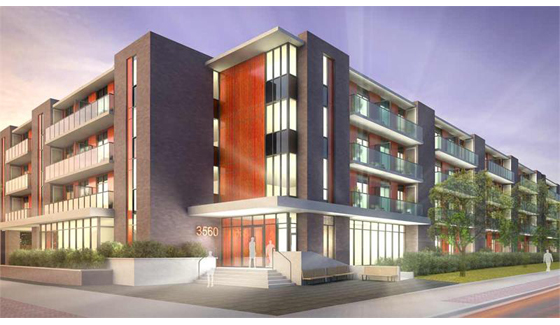 Well, it looks like we have a new condo headed to Scarborough! On the morning of March 12, Urbanation announced via Twitter that 3560 St. Clair Ave. (Kennedy and St. Clair) was sold to insoho Developments late last year for $850,000. A pretty good deal, considering the asking price was $1,349,000.

insoho Developments has opened registrations for their condo development, Imagine Condos. 3560 St. Clair Ave. is a pretty significant site, considering it’s just under an acre in size, it’s close to subway and other public transit, and it fronts three major arteries: Kennedy, St. Clair, and Danforth.

The listing for 3560 St. Clair Ave. (by DTZ Barnicke) says that the site is zoned for commercial and residential. So far, all we have is a rendering for Imagine Condos, and the building looks like it’s only about four or five storeys. Will insoho Developments plan for commercial aspects on the site? Or will they have a boutique condo and use the rest of the site for something else, like a park or landscaped grounds? There are already a few restaurants and recreation options in the area, but some extra retail might be nice for the neighbourhood.

So, insoho Developments received a good deal on the site, they’re planning a mid-rise condo, and registration is open. The best part? Prices are starting at $179,900. That’s right, condos in the GTA that are less than $200,000. We don’t know how many units are available at Imagine Condos, but you can bet that this price point is going to attract some attention.

Stay tuned to NewInHomes.com, we’ll be keeping our eyes out for more information on Imagine Condos by insoho Developments.