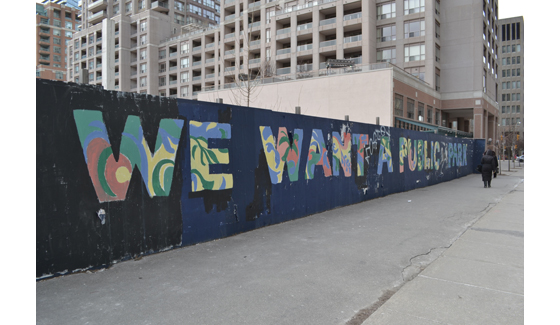 11 Wellesley was one of the most highly debated parcels of land in the City of Toronto. Local residents were pushing for a public park on the site, but the land was owned by the Province, and they weren’t going to just hand it over to the City. Just last week, it was announced that 11 Wellesley was sold to a private developer.

As reported by “Xtra,” Lanterra Developments, the developers behind Maple Leaf Square, Ice Condominiums, and other high-rise condos in the downtown core, reached a financial agreement to purchase the two-acre site. At this point, no applications have been made, but judging by the size of the site, Lanterra will probably propose a large, mixed-use development.

“We are most likely going to see a multi-tower plan for about a thousand units, which doesn’t leave a lot of land for the park,” said local Councillor Kristyn Wong-Tam to Xtra, noting she’s still working to acquire some public green space. “The discussions are still preliminary, but I’m hopeful we can secure the best results for the community,” Wong-Tam continued.

"This is a developer that I have a good working relationship with, and one which already has several projects in the neighbourhood,” she says. “The discussions (regarding green space on site) are encouraging.”

It’s not exactly surprising to see the province move towards residential development rather than a large park. The money that the province raised with this sale should help fund some important projects. And who knows, with Wong-Tam in discussions with Lanterra, perhaps they will come through with a beautifully landscaped public area for the site.

We are really looking forward to what Lanterra has in store for 11 Wellesley. Stay tuned to NewInHomes.com — we’ll be following this project all the way!