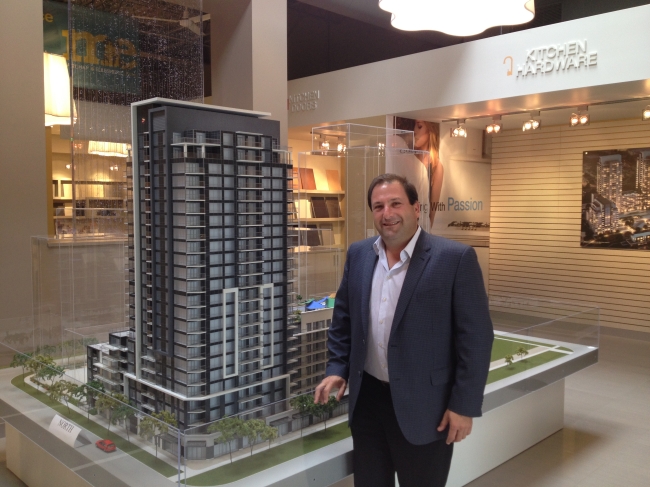 Earlier this week, the Toronto Star’s Newinhomes.com visited with the President of Lash Group of Companies Larry Blankenstein. We mostly discussed their latest project, ME Condos (Markham and Ellesmere Living). We also learned about the future of Lash Group and some of their other upcoming developments.

NewInHomes (NIH): Tell us about Lash Group of Companies. How did you get started?Larry Blankenstein (LB): It’s a family business, and I started it from the ground up. I started on construction sites as a labourer. I learned every aspect of the industry, be it service to land acquisitions to sales and marketing, or financing. I worked my way up over 26 years.From morning to night, I oversee every aspect from acquisitions to sales and marketing to post construction and administration. Basically, the managing of the day to day aspects of a thriving business. We also do property management, which adds to our portfolio.NIH: You are about to take ME Condos to market. Tell us about the history of the project.LB: Markham and Ellesmere has been a five-year plan for us. It’s been in the pipeline for that long. We have spent the past four years working with both the city and the councillor (Glenn De Baeremaeker), and they’ve been a great help to us. It’s all part of his vision for the revitalization of Scarborough. The councillor is very excited about the project, he is a great supporter of ours. We have had the opportunity to work with the city and work with local residents very closely. It’s funny — when we went to council to get it approved, we didn’t see any residents, which the councillor was surprised by, especially given the magnitude of the project. He actually stood up in council and mentioned that.We started out with 45 townhouses, but now we will be taking more than a thousand units to market – so obviously a pretty significant change. We have two rental buildings that we had built in the ‘50s that have aged. In the last few years, people have been tearing down their old rental properties and rebuilding new buildings on top of them, so that’s been something that we have been investigating. We worked with the city on that, and we are replacing all the rental units that we are demolishing, plus adding a few more. As mentioned, we also will have some significant condominium suites on site, plus townhomes. NIH: What type of feedback have you received so far from the local community?LB: We have never been the type to drum up controversy; we have never been to the OMB. We like to work with the neighbourhood. We feel that if the neighbourhood likes it, they will buy in and be our customers – that’s important to us.We have had some great feedback thus far. Over 2,200 people have registered their interest. We haven’t really done a lot of advertising yet, so that’s a great sign. We are building our sales office on site now, which will be over 8,000 square feet. It’s going to be a permanent building. The feedback that we have received from the broker community and locals is that they are very excited. They want to see new construction head into the area. NIH: We understand that you have a unique marketing concept that has been really appealing to the locals. Can you explain that a bit?LB: We have worked very closely with the councillor throughout this process, and we came up with a fun marketing idea. All the people that you see on our hoarding and such, are all working with the councillor – he suggested it. These people live in the neighbourhood, they believe in the neighbourhood, and they represent the neighbourhood. It’s a phenomenal idea that he came up with. Now, they see their picture and post it to social media. Their friends see it, their parents see it, it’s shared everywhere. It’s a chain reaction. It helps give people a sense that this is my neighbourhood. It’s getting the community involved in the project. NIH: What’s your favourite aspect of the project?LB: I love everything – it’s a unique project for us. Starting from the outside, we are working with the city to bring a public park to the area, which will include a splash pad, a sitting picnic area, and an adult fitness area. As well, on our site, we are going to have an outdoor area that will feature a pond and bridge. During winter, it will convert into a skating rink, which you don’t see very often. Inside, because of the site of the buildings, we have the ability to offer some great amenities. They range from a games room, a swimming pool, outdoor eating area – it’s a whole country club in there. We also have a sports lounge that will include many types of game consoles, big screen TVs, exercise rooms, two guest suites, and more. We are trying to engage both the people in the building and the community as a whole.Our starting price of $149,000 was to get people into the real estate market. Some can’t get into the downtown market because it’s too expensive. You’re giving people a sense that they now own a piece of a swimming pool, they own a piece of a big screen TV – they get that sense of accomplishment you get by getting into the real estate game. The local Councillor thanks us for designing units that give everyone the opportunity to own a home.Our units start at one-bedrooms, just over 400 square feet. I’d say that over 40 percent of our units start at under $250,000. It’s not like we have one at $149,000 – we have a whole range of offerings between those two price points. Surprisingly, we have had some previews, and most of the people are looking at the $225,000 to $300,000 range. To the investor market, we may not be what they are looking for, but the end user really seems interested. We are set to open our sales office soon, and we plan on having some fun things in the sales office that no one has seen before. We like to be innovators. NIH: What impact do you think this project will have on the area?LB: We look at this as the start of many things for Markham and Ellesmere. There is a whole revitalization plan; we have talked to the neighbours on both sides of us to expand the site, so who knows what the future may hold. Nothing is firm just yet, but we are very excited with the plans. There are two LRT stations that are proposed, one being within walking distance and the other being within a three minute bus ride. We think the area is ripe for development.We are also leaders in looking at revitalizations. We just finished our third project at Bathurst and St. Clair, which we feel really cleaned up that area. We started off our condominium division with Peter Freed and started the King West push. This is another one of those projects that we feel will be an area to revitalize. We have been around for 58 years, and feel that we have the experience and knowledge that allow us to turn areas like these around. NIH: So, what’s next for Lash?LB: We have our launch coming up, with some previews coming up over the summer. We have our Bathurst and St. Clair project upcoming, which will be launching in either the fall of 2013 or spring of 2014. Our Yonge and Eglinton project will be launching late next year as well – we have a lot of new projects coming up. It’s good to be busy.

The team at the Toronto Star’s Newinhomes.com would like to thank Larry Blankenstein for his time and look forward to watching Lash Group of Companies’ ME Condos take shape at Markham and Ellesmere.