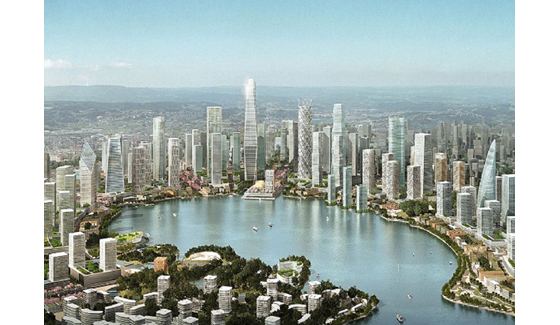 Meixi Lake Master Plan: This is How you Build a City

There has been a lot of talk recently about how Toronto needs to grow, or how the city should be developing. A constant issue, and it was brought up numerous times during BILD’s “Talking City Building in Toronto” event earlier this week, is a proper transit system. The Councillors stated that not only transit needs to be incorporated to the city’s growth plan, but all aspects of the city. Basically, what we need to start doing is thinking of all of Toronto as one giant master plan.

Recently, Kohn Pedersen Fox Associates (KPF) posted details of their master plan for Changsha, China, and we think it is a great example of how to build a city.

The development is called “Meixi Lake City,” and let us tell you, this is no four- or five-tower project. KPF is thinking more like 70 million square feet of mixed-use space wrapping around a man-made lake nearly 100 acres vast. Yea.

The lake will act like the “Central Park” of Meixi Lake City, allowing for people to access the other side of the city via boat.

The high-rises will hug the shores of the lake, and the entire city centre will be connected by pedestrian tram streets, practically eliminating the need for a car.

There will be a number of separate residential communities, with about 10,000 people each, sectioned off with green space dividing them. Each residential section will have a school, shopping area, and other necessary family amenities.

Basically, this is just a way more awesome version of any city ever. Imagine living within a tightly knit community surrounded by greenery and having everything you need around you, and then taking a boat to work! And when you’re in the business district, you can walk everywhere or take a boat to the other side of the city. It’s like Toronto, but instead of busy streetcars, they have actual pedestrian streets, and instead of a useless subway, they have boats. Cool.

Obviously, something like the Meixi Lake master plan is impossible for Toronto since we are a highly developed city, but the idea of including all aspects, from residential, to commercial, to retail, to educational, to transportation all in one plan is the way planners have to start thinking. It seems as though the days of building one tower at a time are coming to an end, and we’re looking forward to seeing how the planners and others involved in the land development industry adapt to this new way of thinking.