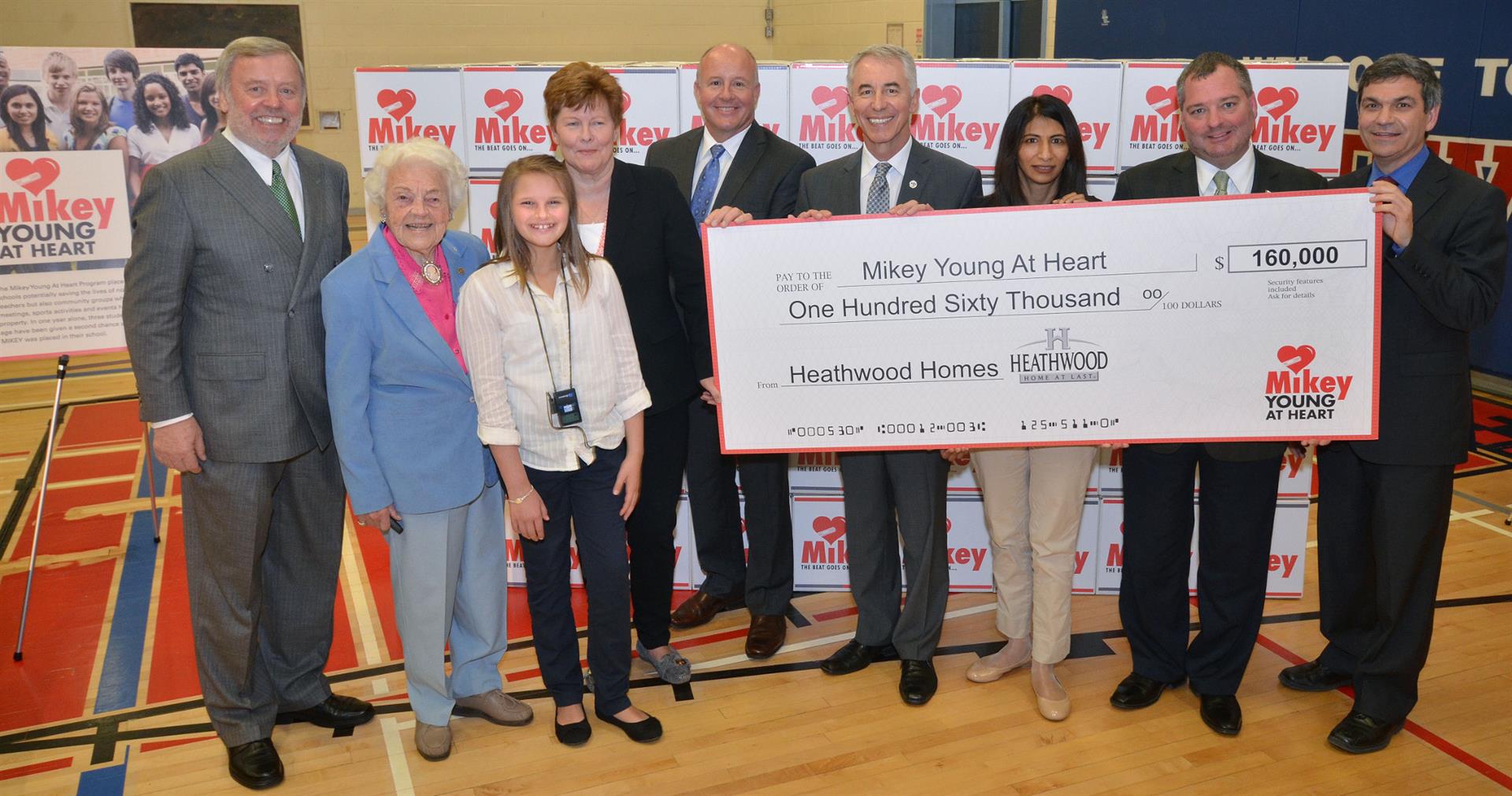 The Mikey Network Makes $500,000 Commitment to all Peel Board Schools

Founder of The Mikey Network, Heathwood Homes, presented a cheque for $160,000 to launch a new program called Mikey Young at Heart, which will help place defibrillators in Peel board schools.

The Mikey Network was founded in 2003 after the tragic passing of Heathwood Homes partner Michael Salem. His passing could have been prevented if there had been a defibrillator nearby and so, compelled by the astounding number of tragedies that occur at home or in public places because of the lack of available defibrillators, Heathwood decided to take action. The Mikey Network has raised over $3 million by placing 1,500 MIKEYs in public places across Canada. The foundation has also helped train 12,000 people in CPR/AED and saved a total of 19 lives, including three students in Toronto.

“This significant donation from The Mikey Network is an impressive step forward to ensure a safer learning environment for our students,” said Tony Pontes, director of education at the Peel board. “We want to do everything we can to make sure students, staff and visitors are safe in our buildings.”

Bob Finnigan, COO of Heathwood Homes presented the cheque to fund the first year of this program, which inspired a larger campaign to raise $500,000 for the inclusion of all 250 Peel District School Board schools and buildings. Currently, there are approximately 200 MIKEYs in elementary and secondary schools across the GTA; the initiative plans to extend this security to ensure the health and safety of over 170,000 students and school staff.

“We’re thrilled to be working with the Peel District School Board to install MIKEYs across the region’s public schools, all while providing greater peace of mind to parents, teachers, administrators and students,” said Hugh Heron, the Chairman of The Mikey Network and President of Heathwood Homes. “After seeing a close friend pass away from Sudden Cardiac Arrest, we made a pledge to provide the Canadian public with the necessary tools to save lives. This announcement moves us one step closer to achieving that goal.”

With an ambitious goal to reduce the number of fatalities and long-time complications from Sudden Cardiac Arrest, Heron challenged other school boards across the province to make defibrillators a mandatory standard in their buildings. Earning support from members of the board, parents, students and staff, this gift will surely change the quality of life for many people.