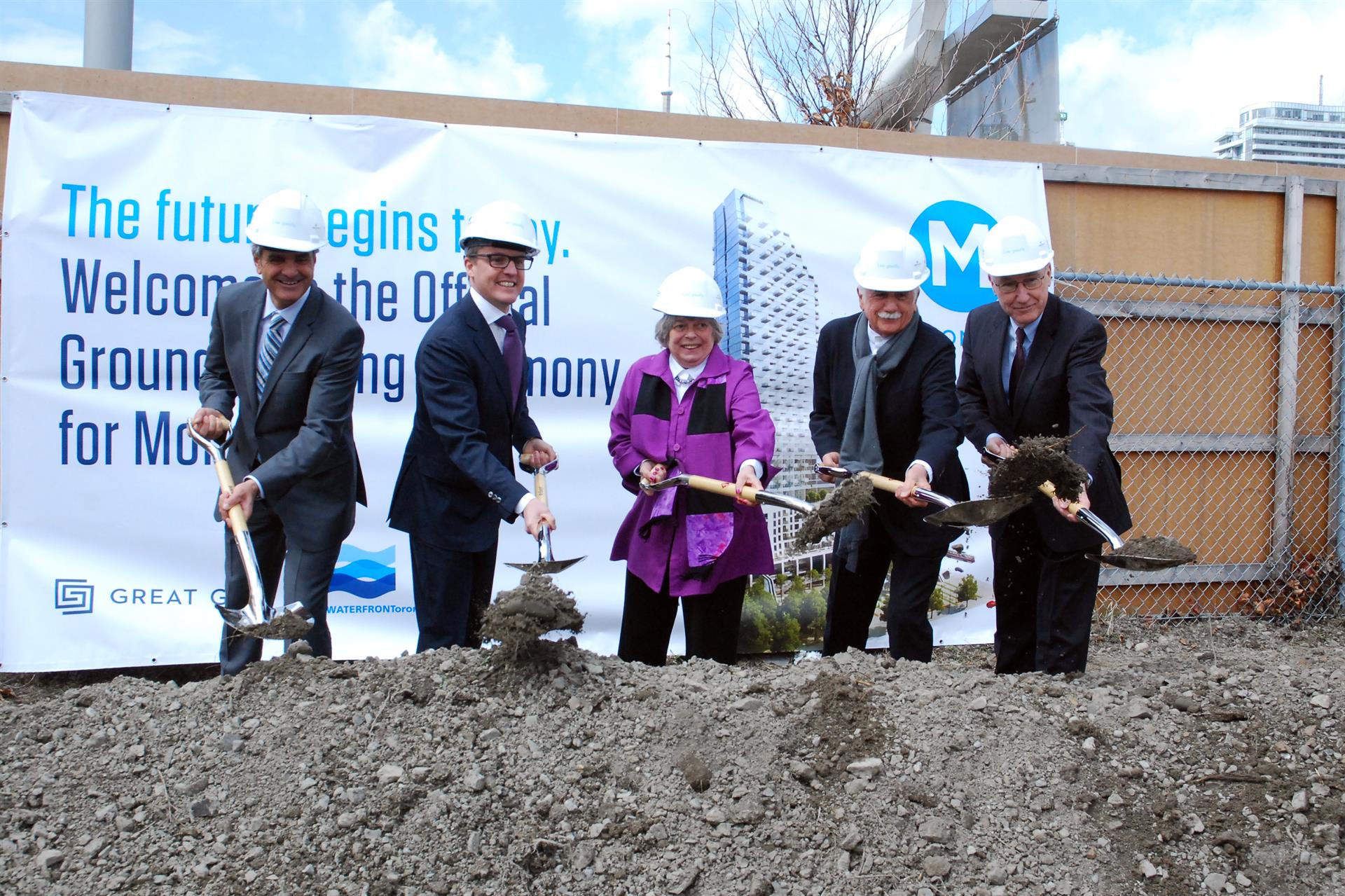 Marking an exciting milestone for the East Bayfront neighbourhood, Great Gulf and Waterfront Toronto celebrated the official groundbreaking of Monde, a 44-storey, LEED Gold Certified condo designed by world-renowned architect Moshe Safdie, who was in attendance. “We believe that Monde will represent an architectural centerpiece within the East Bayfront neighbourhood,” said Christopher Wein, President of Great Gulf Residential. “Monde will become one of Toronto’s most sought after locations, given the work already done by Waterfront Toronto in building high-quality parks and public spaces, the ultra-high-speed broadband network for residents and the exciting commercial and employment opportunities in the area.”

President and CEO of Waterfront Toronto, John Campbell, was also in attendance for the celebration. “Not only does the neighbourhood get a building designed by one of Canada’s most celebrated architects, but the investment in Monde by Great Gulf is a sign of confidence in the waterfront and a great return on the investment Waterfront Toronto has put into flood protection, public realm and future-ready infrastructure,” Campbell announced. Located on Queens Quay East right next door to Sherbourne Common, Monde is the first residential project to break ground in the East Bayfront area. We feel like we’ve spent a significant amount of time down on the Waterfront this year with the announcements of other condos, an Innovation Centre, and a new Ferry Terminal further west.

“Moshe Safdie and Great Gulf have provided leadership on design excellence that builds on the strong work of Waterfront Toronto in the precinct,” said Toronto Deputy Mayor Pam McConnell. “The development of this new neighbourhood into a healthy community with a diversity of uses is taking a great step forward today.” After the speeches, we had a chance to chat with Safdie, who recently received the 2015 AIA Gold Medal, a highly prestigious architecture award for lifetime achievement. Monde is Safdie’s first residential project in Canada since his famous Habitat design at Montreal’s Expo ‘67. He hasn’t taken that long of break from residential though.

“In the last 15 years, we’ve been doing a lot of residential work in Asia, in Singapore, in Chongqing, Qinhuangdao, in Colombo, and also in Saudi Arabia and Israel, but none of it was here, so it’s nice to be back,” Safdie said. When it comes to designing buildings in Asia and Canada, there are a couple factors that make his approach to the designs slightly different. “One obvious thing is that this is a cold city in the winter, there (Asia), we worry about summer. This is a building (Monde) that needs to function through all the seasons,” Safdie explained. “I think that in Asia now, there is an emphasis on family living and larger units, and here, a lot of the downtown buildings are smaller units for young people and empty nesters. So, there is a demographic and climatic difference.” Comparing his two Canadian residential buildings, they may not look the same, but there are still similarities. “Many of the themes, indoor and outdoor living, the emphasis on outdoor space and roof terraces, all these are common to Habitat and this building,” says Safdie. “The context is different; Habitat was prefabricated, this is conventionally built. Habitat was family living and village-like, and this is more urban - you could call these treehouses.” This is your opportunity to live in a condo designed by a world famous architect. Once Monde is complete, Toronto’s Waterfront will be the talk of the country and will surely make waves around the world.

To view the remaining units at Monde, visit the presentation centre at 291 Lake Shore Boulevard East Monday to Thursday from 12 pm to 7pm, or on the weekend from 12 pm to 6 pm. You can also call 416-466-8885 for more information.