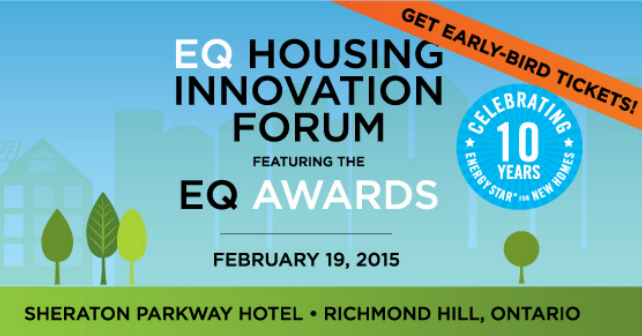 When it comes to What Homebuyers Want, the topic of sustainability is unavoidable. Younger generations have become more environmentally conscious. Green products have become a billion dollar market, and ever since the early 2000s, sustainability has been a significant factor in Ontario’s new home industry.

Recently, EnerQuality announced that they are now accepting nominations for the 2015 EQ Awards. The EQ Awards honour builders, energy evaluators, and industry partners in Ontario for their green building practices. The awards are important because a huge part of encouraging green building and design is recognizing and acknowledging when it is practiced.

EnerQuality formed in 1998 as a partnership between the Canadian Energy Efficiency Alliance and the Ontario Home Builders’ Association. EnerQuality’s goal is to make Ontario’s new home industry the most efficient and sustainable in the world by designing and developing green building programs. In 2005, they launched ENERGY STAR for New Homes, and the program has made a strong impact on the features and finishes that you will find in new homes today.

Since the launching of ENERGY STAR, more than 58,000 qualified homes have been constructed in Ontario, and last year, 29% of the new homes built were qualified. ”ENERGY STAR is the most trusted brand for energy efficiency in Canada, and awareness is increasing that new homes can be qualified to this high standard,” said Corey McBurney, President of EnerQuality. “We  must recognize those builders who are continually improving, and pushing the boundaries through innovation.”

There is a wide variety of categories at the EQ Awards recognizing a range of green accomplishments. The Building Innovation Award “recognizes a builder who has demonstrated technical excellence while implementing high performance building practices.” The Ontario Green Builder of the Year Award goes to the builder who best exemplifies environmental responsibility. Other awards include: EnerQuality’s ENERGY STAR® for New Homes Builder of the Year (small/medium/large volume), Best Green Marketing Campaign, and Hall of Fame.

This year’s winners will be announced at the EQ Awards Gala at the Sheraton Parkway Toronto North Hotel and Suites in Richmond Hill on February 19, 2015. After the awards, there will be a full day EQ Housing Innovation Forum, where the 10th anniversary of ENERGY STAR will be celebrated.

“It is important to recognize the outstanding innovators committed to ensuring Ontario remains a leader in high performance building. We are proud to acknowledge and celebrate their remarkable achievements,” said McBurney.

The deadline for nominations is December 5, 2014. To nominate a person, company, or maybe even yourself for an EQ Award, click here.