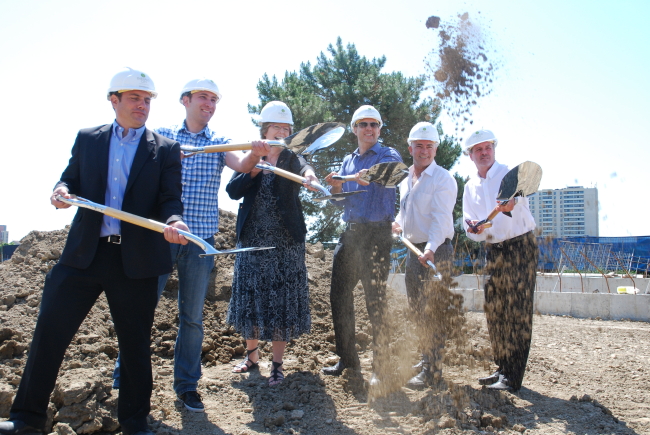 On Friday June 21, 2013, we headed out to Don Mills Rd. and Sheppard Ave. in Toronto for the groundbreaking of ELAD Canada Inc’s Parkway Forest Community Centre, which will play a pivotal role in their Emerald City master plan.

This is a milestone for the development of Emerald City, so a large crowd came out to celebrate. Friends, family, colleagues - basically anyone who is excited about Emerald City taking the next step towards completion was there. Recently, in a release, Councillor Carroll stated, “The vision of Emerald City as a family-oriented haven within Toronto takes another big step towards realization with the groundbreaking for the Parkway Forest Community Centre. Building residences isn’t enough. It takes a community hub like this to connect people to the neighbourhood, to one another, and to healthy lifestyle choices. As a vital component in the overall vision for Emerald City, and in the continuing evolution of North York, the Parkway Forest Community Centre will provide a safe place for children and youth to come together in activities that expand their minds, strengthen their bodies, and help define for them what a community can and should be.”

Ben-Or added: “As a developer, our commitment is not just to build great condos, but to take a leading role in building great communities. To be able to contribute such an important neighbourhood component as the Parkway Forest Community Centre to the overall plan for Emerald City is something we see as a duty. It’s a tangible way to let residents know we care about the quality of their lives and that of their families.”

Some of the amenities of Parkway Forest Community Centre include: a double gym with an upper level running track, an aerobics/dance studio, a weight room, offices, a daycare managed by the YMCA, two multi-purpose sports courts, an outdoor pool, and much, much more.

The Community Centre will border a public school on the south and have a series of paths connecting locals to the north side. This is the first community centre to be built in the neighbourhood in the last 20 years, and as a part of Emerald City, it will serve as a recreational hub for the entire community. About Emerald City by ELAD Canada

The third condo tower, Dream Tower, is currently underway. Dream Tower will rise 25 storeys and feature 316 suites, ranging in size from 523 to 1,265 square feet. Some of the impressive interior features and finishes include 9’ and 10’ ceilings, high quality cabinetry, Caesarstone countertops, floor-to-ceiling windows, and stylish light fixtures.

To learn more about Dream Tower visit the project page on Newinhomes.com