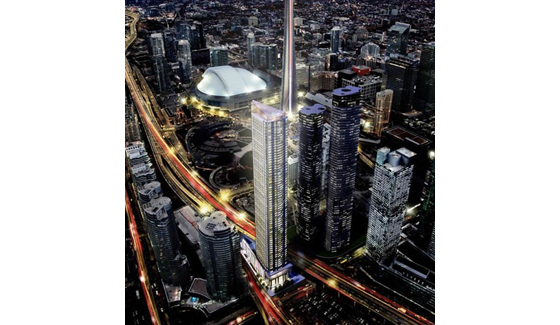 By Lucas on Oct 19, 2012
With the start of the industry’s busy fall season, comes some premium launches in Toronto. One development that’s been on our radar in the past six months is Ten York, a joint project between the City and our friends at Tridel. The initial details for Ten York were released on November 24th, 2011. But now, we have brand new concepts for Ten York to drool over.The first proposal was met with some push back, with local residents upset about both the building form and the planned 75 storeys. Since that proposal was released, Tridel went back to the drawing board..

The first change is fairly obvious, Ten York is now planned to stand 67 storeys. The second, and in our opinion the more dramatic change, is that the overall form has been altered. The tower has a more significant step back versus the initial rendering. Wallman Architects revamped the design, offering a more aggressive angle in the podium, which is reminiscent of the triangular aspect of Pure Spirit's design, and that has been recognized as one of the coolest towers in the GTA. With these new renderings, it appears as though Tridel is set to take Ten York to market.

This partnership between Tridel and BILD Toronto is a first for Toronto. In the past, BILD Toronto has managed Toronto’s surplus land inventory, looking to maximize the city’s return on underused land. Now, they are partnering with Tridel to develop the site.

Ten York will be an interesting test for our market. There is no doubt that we have seen a change of pace in the past few months, with many developers choosing to defer their launch until the market is a little less crowded. With Ten York, Tridel is bringing 695 more suites into the pre-construction scene. It will be an interesting launch, one that we will be monitoring closely.