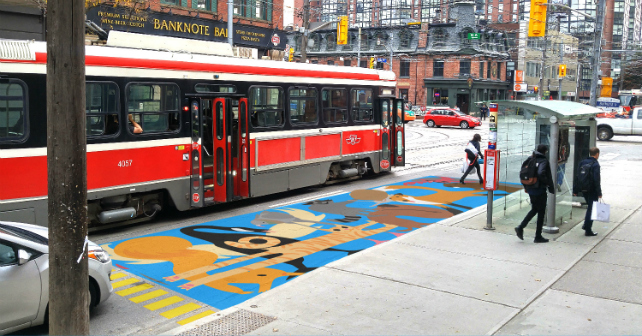 Streetcar Safety Murals may be coming to Toronto!

Following the full day of speakers and panels at re:Public - NXT City’s Public Space Symposium, I attended the after-party where the NXT City Prize was presented!

The jurors narrowed the submissions down to 30, then eight finalists were selected. In the end, the NXT City Prize went to Streetcar Safety Murals, the proposal by Lucas DeClavasio and Andrew Patterson, the co-founders of Toronto-based agency, Wysp Creative.

According to the proposal, murals painted on the road in between the curb and the streetcar, stretching the length of the streetcar, would bring more attention to the zone where cars are not supposed to enter if the doors are open. The goal is to prevent close calls and accidents between users of the road and streetcar patrons.

I recently had a chance to sit down with Lucas and Andrew to learn more about their vision for the Streetcar Safety Murals. Newinhomes (NIH): How did you come up with the idea?

Lucas DeClavasio (LD): I bike to work every day along a busy streetcar route so I see close-calls at streetcar stops all the time. Both motorists and cyclists are guilty of it and when it happens as much as it does, it can’t just be that people aren’t paying attention. Something else needs to be done. So it started with trying to come up with a way to bring more attention to this invisible barrier. The mural idea came to us pretty quickly because of the creative nature of our work.

NIH: Wouldn’t it make more sense to put those arms on the doors? The ones you see on school buses?

Andrew Patterson (AP): We’ve had a few people mention that actually. Yes, the murals are about safety, but they’re also about engaging the local arts community and beautification.

LD: Also, we feel like a lot of people don’t realize that this was a submission for an idea/design competition on how to creatively use Toronto’s public space. Swinging arms on a door probably wouldn’t have won over the judges, but we’re glad the proposal has spurred others to think of alternative ways to make our transit system safer. NIH: When will the Streetcar Safety Murals be implemented?

AP: We just entered discussions with the NXT co-founders and started planning on our end. There isn’t a set date for when this will actually become a reality, but with all the positive feedback we’re confident that we’ll be making strides in the new year. Part of the NXT City Prize is the chance to meet with the City to discuss the feasibility of the project, so we’re preparing for that and looking forward to it.

NIH: How will artists be selected for the murals?

AP: That’s something we’re still discussing, but we have an extensive network of artists that we rely on for some of our work, so we don’t foresee it being difficult to find artists for the project. Toronto’s art scene is easily one of the most talented and diverse in Canada, in my opinion, so I really want to make the Streetcar Safety Murals happen so the city has yet another canvas to display these talents.

LD: Since the proposal has received some decent media coverage so far, we’ve had a lot of artists reaching out to congratulate us and express interest in participating. This has been pretty cool because we’re actually big fans of some of the artists reaching out.

We are very excited to see if the City gets on board with the Streetcar Safety Murals idea. This also may be something that builders and developers would be interested in outside of their residences if they are on a streetcar route.