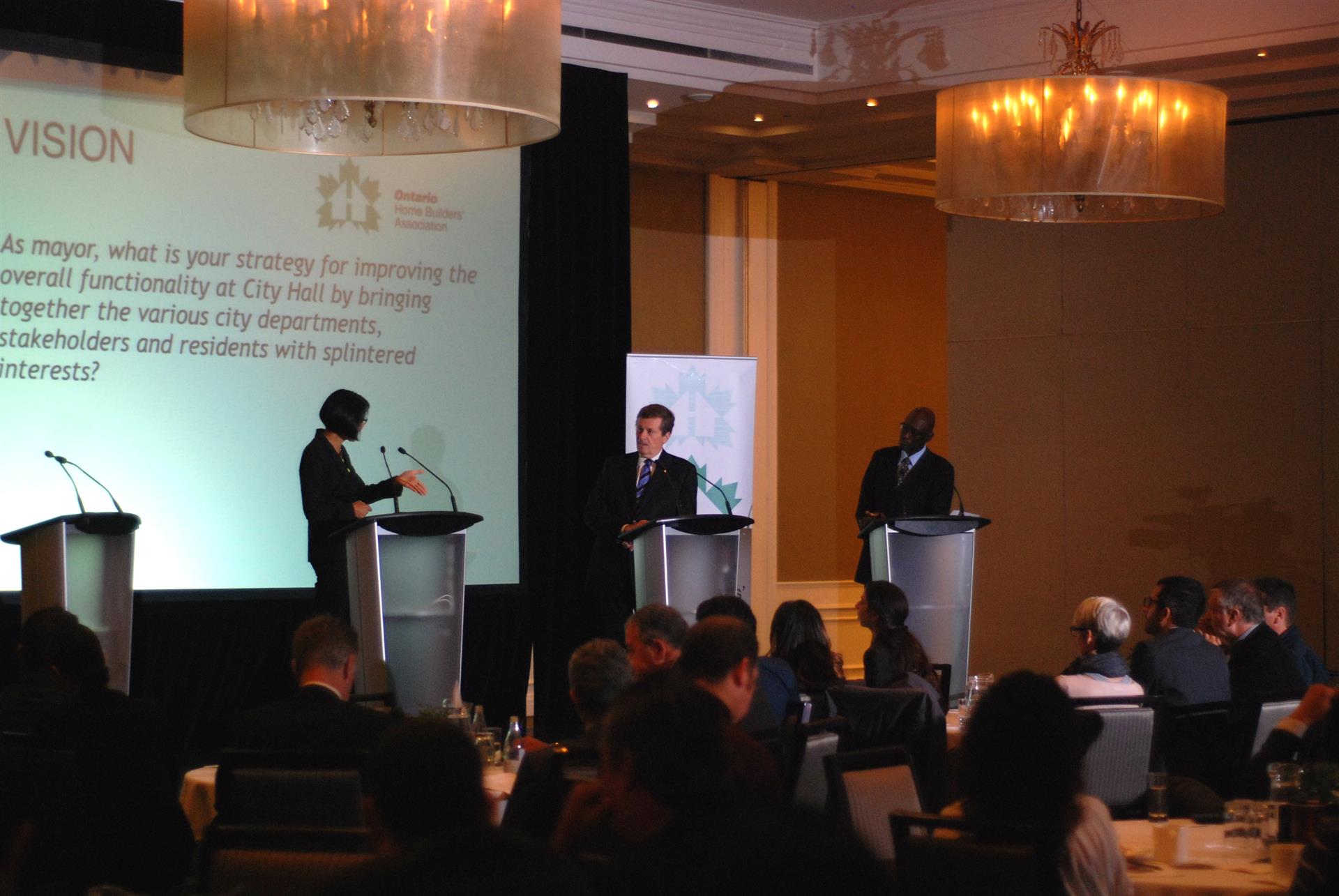 A Summary of the OHBA Mayoral Debate

The new development industry in Toronto accounts for approximately 322,000 jobs and $17 billion in wages. This year alone, investment value has risen to $8.6 billion, and 72,000 jobs were created for a total of $4 billion in wages.

Neither Tory or Chow believe that they can “roll back” on these taxes, but Tory is open to revisiting development charges and the land transfer tax if the industry can propose feasible alternatives. Chow proposes committing a more significant portion of development charges to go towards affordable and rental housing over the next decade, as well as taxing an extra 1 percent on land transfer tax for homes over $2 million. She also promises that developments that put a focus on creating more affordable and rental housing will be fast tracked through the approval process, aiming for one-year approvals. Chow believes 20 percent of new residential buildings should be affordable and both candidates are in favour of inclusionary zoning.

In Ontario, the renovation and construction industry employs nearly 200,000 people and has generated $2.3 billion of investment activity in Toronto. For this portion of the debate, the candidates were asked how they would streamline the permit approval process.

Chow said that the City needs to start cutting through some red tape, but almost more importantly, they need more staff. Tory proposes that the City needs a process in place for smaller renovation projects so that people are not waiting months or even a year for approval. He also pointed out that City staff is operating on old systems and need to upgrade their technology so that work can be completed more efficiently.

Tory is sticking strong to his SmartTrack plan, which would extend from Kipling and Eglinton, to Dundas West Subway Station, then down to Union, and then straight up to Main Subway Station and on up to Unionville. It has taken priority over the Yonge Subway Relief Line, but he is still open to the idea of building the relief line. Tory said SmartTrack will be put in place in seven years and is predicated on new development taking place along the line. He proposes that the City and industry work together to decide what types of development are appropriate for every stop along SmartTrack.

Chow is very skeptical of Tory’s plan, and believes that buses, LRTs, and subways are the way to go. Chow said that construction on the LRT line can start construction in four years, but Tory said it would take her close to 17 years to finish. The new development industry is constantly bogged down by new and disjointed development related policies. This lack of direction from within the City makes it difficult for developers to build at a reasonable pace. For this section of the debate, the candidates were asked how they would bring the industry, City departments, stakeholders, and residents all together to create a more functional City Hall.

In response, Chow reminisced about how she brought all the City departments together - public health, child care, librarians, parents, elected officials etc. - into one room at a table to establish the best child centre policies possible.

Tory told everyone in the room that they need to just jump on board, that it’s the industry’s responsibility to get involved (which it is) with proposals and processes like the development permit system. He also hopes to create more accountability in City Hall with regards to how tax money is spent. There were two audience questions that struck a chord with the candidates: Their opinion on the Ontario Municipal Board (OMB), and the mandating of family-sized units.

Chow and Tory both acknowledge that the OMB is not perfect and that a local appeals body would be a more efficient and fair way to settle development disputes. While it’s great that the candidates believe that Toronto can “write its own story,” as Tory eloquently put it, a local appeals body doesn’t necessarily solve the problem that communities feel outgunned by the resources that developers can afford to bring to the table. This idea, like many of the others presented that morning, obviously needs to be fleshed out.

When it comes to family-sized units, many developers find that the three-bedroom units they end up building need to be sold at too high a price for a family, and the units eventually sell to investors. Chow and Tory are both against mandating family-sized units. Tory believes that investing in parks and schools is another great way to support families in Toronto, and he is willing to work with the industry to come up with other ways to appeal to families. Chow suggests making it more financially attractive for developers to include family-sized units, and is also open to methods other than mandating.

The team at Newinhomes.com wishes the best of luck to both Olivia Chow and John Tory on election day! Don’t forget, get out there and vote on October 27. As a developer, it’s your chance to shape the city more than you already do.