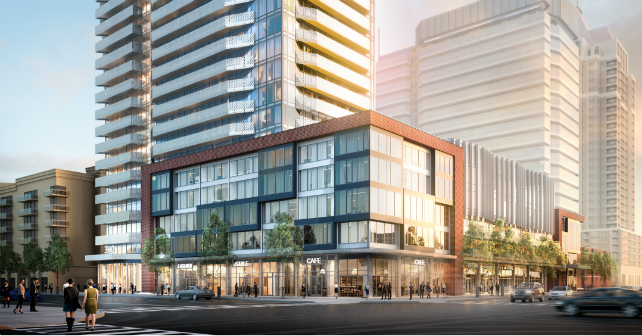 Wesley Tower is coming to Mississauga this August!

It has arrived - the first rendering of Wesley Tower, marking Daniels’ triumphant return to the award-winning, 23-acre master-planned, mixed-use Mississauga City Centre. Some know it as the Daniels City Centre.

Designed by Rafael & Bigauskas Architects, Wesley Tower will rise 40 storeys at Confederation Parkway and City Centre Drive, just steps from the Square One shopping mall. The sleek, contemporary design will surely complement the other towers of Daniels City Centre, including the gargoyle festooned One Park Tower and Limelight Condos, the building with the glowing green roof. Daniels first made headway in this Mississauga area with The Capital Condos back in 2004 and it spurred a great deal of development, so we’re happy to see them back in the neighbourhood, further enhancing the already cohesive condo community.

The interiors of Wesley Tower were designed by Figure 3, including the amenities, which consists of a fully equipped gym, kids’ play areas, co-working spaces, and a stunning outdoor terrace. Daniels has become known for including family-friendly amenities in their condos, promoting family living in high density housing and walkable neighbourhoods.

All the amenities a family needs are within a close proximity, including schools, grocery stores, banks, and there are many opportunities for recreation with the YMCA nearby and a three-acre park steps away. Getting around by foot or bike is a breeze, and Mississauga and GO transit are reliable and quick. If you do need to get around by car, highways 403, 401, and 407 are easily accessible.

Register for Wesley Tower in Mississauga

Daniels has announced that Wesley Tower will open this August, but if you want to be invited to the first advance sale, you need to join the Inner Circle. Daniels’ Inner Circle Program gives serious buyers access to preview pricing and the widest selection of plans and views all before the general public. To join the Inner Circle, it costs $300, which is then applied to your purchase or refunded if you do not end up buying a unit.

Last month, Daniels received the Homeowners’ Choice Award (HCA) from Tarion for the high-rise category, which is their second consecutive win! The HCA Awards recognize builders across Ontario for their high levels of customer satisfaction, and they’re the only industry awards to be fully determined by a homeowner survey.

Clearly, Wesley Tower is going to be a homerun; Daniels knows the area, they know how to take care of their purchasers, and the tower is designed for singles, couples, and families!