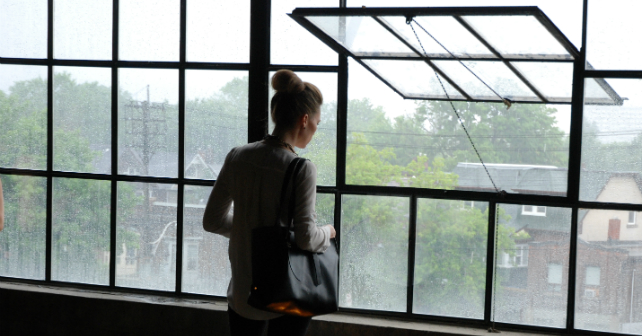 Why is Natural Light so Important to Homebuyers?

New York is known as the city that never sleeps, Paris is frequently referred to as the City of Light, and Las Vegas conjures images of technicolour billboards and windowless casinos. While all urban centres are not quite as bright and intense as these infamous cities, they do share some qualities, such as artificial light pollution and modern design, which oftentimes disconnect us from the natural environment.

As Oberlin College observed (and Kevin Van Den Wymelenberg quoted in his article on natural light), “modern designers filled the world with buildings and developments divorced from their context, existing as if in some alien realm disconnected from ecology.” Is this disconnection perhaps why we place so much emphasis on features such as natural light and views when purchasing our homes? As urban populations continue to grow, it is interesting to delve into the underlying psychology that dictates why we choose a certain space to call home.

Adequate daylighting can help reduce energy costs and decrease our ecological footprint. However there are other psychological reasons why homeowners are attracted to natural light that go beyond the practical economic and environmental benefits. Building designs that feature natural light have been proven to reduce stress, improve emotional health, increase productivity, and boost our mood. These features become increasingly important in high density environments, like the city, where buildings and structures are more likely to limit access to natural light. Natural light and the brain

In the field of architecture, the practice of using natural light to illuminate spaces is referred to as “daylighting.” According to Wymelenberg of Architectural Lighting, “purists” insist that to be considered a “daylit space” it must use natural light as the primary source of daytime illumination, create a visually and thermally comfortable environment, and maximize electric lighting energy savings. However, for the average homeowner, daylighting simply translates into a space with windows large enough to provide some natural light and a view. The benefits of daylight

Humans prefer to work and live in spaces that capitalize on natural light rather than spaces that rely solely on artificial light. Natural light is associated with the appearance of more open space and helps to create a more comfortable and aesthetically pleasing dwelling. However, our preference for natural light lies deeper than merely aesthetics, it is intimately connected to our brain functions and natural bodily rhythms. Countless studies have proven the benefits of daylighting such as increased productivity in the workplace, enhanced educational performance in elementary schools, and improved patient recovery times in hospitals. With so many benefits, it’s no wonder that we search for this feature in our homes.

In a study conducted by Mirjam Muench, two groups of people were compared; one group was exposed to daylight, the other was exposed to only artificial light over the course of several work days. Muench observed that the people working under natural light were significantly more alert at the beginning of the evening. Subjects exposed to artificial lights were significantly more tired because their cortisol levels had dropped under the conditions, leaving them more stressed and reducing their ability to stabilize energy levels later in the day. Artificial light not only has a negative effect on our mood, but also increases the odds of obesity. A collaborative study between the Ohio State University and the University of Haifa concluded that prolonged exposure to artificial light can increase the likelihood of overeating. The World Health Organization also recently declared shiftwork as a “probable carcinogen” after a link was observed between breast cancer and women who worked the night shift. An absence of natural light therefore makes us sleepier, stressed, and more likely to overindulge, reducing our ability to work efficiently or make use of the hours outside of work.

The Lighting Research Center in Troy, New York also reported that daylit environments provide mental and visual stimulation necessary to regulate our circadian rhythms. These physical, mental, and behavioral changes rely on cues from natural light and darkness to function. For individuals suffering from seasonal affective disorder, natural light in the morning can also help reduce symptoms by resetting their internal clock. “Our ancestors evolved in a very regular light-dark cycle, and our bodies just work better that way,” observes David Avery, an expert in light’s impact on health at the University of Washington School of Medicine. According to Avery, erratic lighting cues are detrimental to our bodies’ delicate natural rhythms and can lead to fatigue, low mood, and even depression. The American Psychiatric Association recently concluded that natural light was just about as effective as antidepressants in treating several forms of depression.

Natural lighting provides the home with a natural source of heat, which also has effects on our mood and productivity. In a study by Cornell, employees that worked in temperatures that were below 20 degrees Celsius made 44% more mistakes than those who worked at optimal room temperature (25 degrees Celsius).

Finally, natural light also translates into a number of economic benefits that go beyond savings on our energy bills. Researchers from the Light Research Center estimate that commercial real estate with no windows leases for approximately 20 percent less than spaces with windows. If natural light is important to our workspace, it is undoubtedly important to our homes, where we begin and end each day. The mind and the home: A symbiotic relationship

In her article on the meaning of home, Julie Beck quotes William S. Sax, who observed that "[p]eople and the places where they reside are engaged in a continuing set of exchanges; they have determinate, mutual effects upon each other because they are part of a single, interactive system." For Sax, our homes are not simply empty shells that we decorate according to our tastes. The environment and architecture of our homes have profound effects on our mood and bodies, and this is often reflected in the criteria we use to assess the benefits of a living space. In dense urban settings, we can easily become dislocated from nature, and features like natural lighting become more than just another perk, they become essential to maintaining the balance between body and mind.