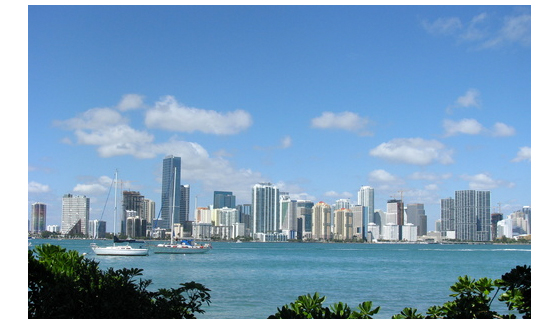 Miami has been looking pretty good lately, as far as amazing architecture goes. Remember The Grove, which is designed by BIG Architects, we reported on back in November? Pretty cool. And, Miami even had a new fancy parking garage designed by Herzog & de Meuron.

Well, Miami is set for another interesting condo design because Zaha Hadid has just been commissioned for a high-rise project at 1000 Biscayne Blvd., a waterfront site with great potential.

The condo will rise next to Museum Park, and fill a significant space in the Miami skyline. This face of high-rises is referred to as the “Biscayne Wall,” and Zaha Hadid’s project will complete it.

The site is currently occupied by a BP station, so it’s not the largest, but Zaha Hadid can practically work miracles with any sized canvas. Details of the project are expected to be released in 2013.

So, why is this a big deal? For one, it’s great to see a city like Miami branching out design-wise, thereby creating a more cultural atmosphere with their surroundings. Secondly, Zaha Hadid Architects is known for their outstanding work in the eastern hemisphere, and this project in Miami will be their first residential design in the west.

Zaha Hadid Architects has produced approximately 950 projects in 44 countries, and they have roughly 350 professionals on their staff. We need a team like this in the western hemisphere, not just in the states, but in Canada! How cool would it be if Zaha Hadid spent 2013 designing for big cities in North America?!

Being known for harmoniously blending her designs with the surrounding environment, we would love to see what Zaha Hadid would come up with working with a Toronto site.

Would you want her to design a high-rise condo for Toronto?